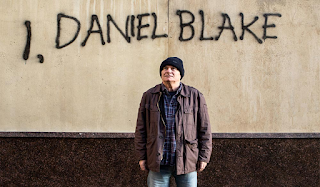 The thing with Ken Loach’s latest, ‘I, Daniel Blake’, is that it hardly feels like fiction at all. Oh he’s been accused of exaggerating and fabrication in the name of Leftist propaganda and all that, but it really didn’t scan that way for me. I’ve heard too many tales and read too many accounts that the idea that it was all made-up just didn’t enter my head. Anyone who has had to call up HMRC or any Government call line (I flinched at writing “help centre”) will instantaneously recognise the trial of calling up to state a grievance or enquiry and getting a lot of stonewalling or/and jargon for the effort after a prolonged wait. Indeed, one of the biggest laughs in the sold-out screening I attended was when the classical music for being put “on hold” came on: Yeah, the laughter seemed to say, we’ve all been there. 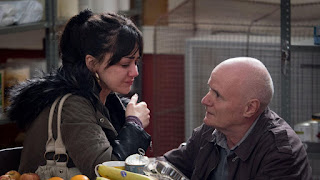 It’s been accused of miserablism, but I didn’t get that. Oh, it’s about people being made miserable but the tone was too truthful and elevated with unforced humour. This was hardly Bela Tarr, ponderous and wallowing (hey, I love Bela Tarr). Surely one of the dominant aftertastes is how Loach portrays a society that is always helping one another, a constant current of small acts of assistance. Not only with Daniel Blake (Dave Johns) befriending a struggling single mother (Hayley Squires), but in people helping him when he goes to the library, or at the food bank or simply neighbours. Commentators like Toby Young may condescend and disbelieve but the characters in Loach’s film are bonded together by the fight against the patronising, sneering proclamations and the assumptions and stereotyping of those that have not experienced such hardships. Perhaps because Loach doesn’t portray the claimants as “scroungers”, Young does not believe. Young seems to think “reality” TV shows such as Channel 4s ‘Benefits Street’ are more truthful, showing that he knows not how such things as editing and narratives work. This rendition of society full of the little fleeting, casual altruisms that we all need struck as truthful, touching and defiant: it implies society is commonly decent and obliging. Everyone chips in when up against a seemingly impenetrable wall of Government policy concerned with game-playing and chastising those in need.

The performances are great. The camerawork is typically unfussy, allowing character rather than technique to come to the fore. It’s funny because people naturally are. Paul Laverty’s script even finds a way to make the final speechifying credible. Yes. there's all this to note technically, but it's one of those films that is likely to bypass the artifice that creates film to speak directly to people's experiences. 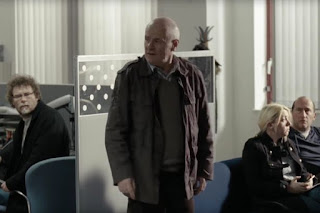 Yes, Loach’s ‘Kes’ had a similar effect as it always reminds me of school and this is the neo-realism that typifies his films, the kind that renders life and people so recognisably. It did not occur to me that people would attack ‘I, Daniel Blake’ for being false (put that down to my naivety); I thought the truth of its portrayal of a certain time and experience in England was incontestable. The reason why people go “misty-eyed” at this film, Toby Young, is because they recognise themselves and friends in it, or stories they have personally been told. You can politicise these reactions and deride them, but they come from real experiences. And in that way, this film is so much of its time which makes it vital and needed; the kind of film referenced by politicians to illustrate a point. A film that will speak to and for many at this time, and one that will be looked to in future to illustrate how political policy can insidiously but surely destroy lives.