"Paterson" - and the joy of everydayness 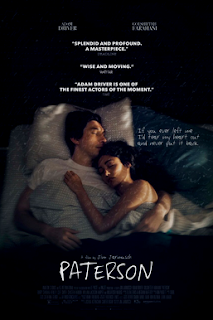 Jim Jarmusch’s ‘Paterson’ has a certain pace and tone that demands it be met on its own terms; and come halfway through if you have recalibrated to its vibe, you will find the same pleasing irreverence and life-affirming aftertaste that perhaps he hasn’t quite captured since his early work. It’s not about melodrama or bad things happening; the ‘character arcs’ so beloved of narrative planning is here ever-so slight, or rather they do not dominate as typical of dramatic thinking. This allows the small details to rise to the surface, like the grunts of the dog, like the overheard conversations on the bus, like how Paterson’s girlfriend has a penchant for black-and-white impromptu designs. These details are not clearly comedic, but accumulation makes them gently funny: by the time Laura makes cupcakes with the same b&w avant guarde inclination, it’s amusing. Jarmusch lets the natural humour of things rise to the surface over time. It’s a film that rewards patience.

Paterson drives a bus through Paterson, New Jersey (which means his name is on the front of the vehicle like a giant nametag), and we follow him through a week on his usual life routine: wake up to kiss his girlfriend; eat breakfast; steal a few moments to write his poetry before driving the bus; get home to be in love with his girlfriend; walk the dog, stop off for a drink at his local bar. He writes poetry but this doesn’t make him vividly unique; rather, it is indicative of the kind of gentle remarkable qualities that make creative people distinctive. He’s quiet but not socially awkward. He’s no tortured genius, just working at an artform he loves. And like much else in the film, repetition of the poetry reveals its worth and joys. Adam Driver is noticeably different from the drippy emo-like Kylo Ren from ‘Star Wars: The Force Awakens’, or even the slightly schlubby National Security Agency analyst in ‘Midnight Special’: here he makes the most of his hang-dog looks, and indeed the entire film can rest easily upon them. Golshifteh Farahani as Laura could have been his cookie girlfriend – the kind that indie romances see as liberated spirits – and she is that too, but it doesn’t condescend or raise her on a pedestal, which means she never quite becomes a manic-pixie girl. 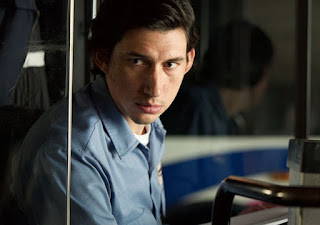 The nature of the film allows this cookieness to be a means of her showing real affection and individuality.  And so on: the eccentricities of the characters that Paterson meets never allow them to become laughing stocks, never quite allowing them to become tropes. Jarmusch’s humanity and amusement at people’s quirks dominate.

It’s nice to see a film where the characters are possessed of a natural goodness, a decency that doesn’t demand ‘conflict’ to show who they are. However, there is a gun pulled at one point and, afterwards, the camera lingers on Paterson’s expression with the adrenalin still running, startled by his own reaction. No, here, it’s the everydayness that is revealing. We see Paterson developing his poetry over days, the text scrawled over the screen. Indeed, people seem to recognise each other as poets and artists, as when Paterson takes time to talk to a young girl writing  her own poetry – and through this encounter, we get an example of how one unrecognised artist can influence another. Life is full of such slight but worthwhile encounters, which Jarmusch has always presented as a thesis.

Peter Bradshaw notes that Jarmusch turns Paterson into a fantasy version of a real place: for example the fact that Paterson and Laura have “never considered or even heard of public performance or poetry slams, or sending his work to magazines, or self-publishing digitally.” Indeed, but it is very evident that they are quite apart from much of modern convenience; Paterson balks at have a smart phone, for example. As Bradshaw further says: 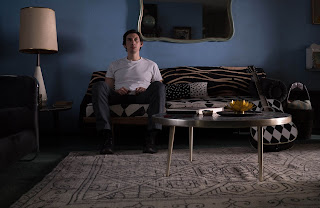 “Yet so much of the rest of the movie is not quite real, or perhaps it is rather that Jarmusch does not replicate reality in the way other film-makers do.”

And this feels closer to the truth: this is not quite neo-realism, and yet it is only the last encounter that seems truly to verge on fantasy, maybe because it is too on the nose in the way that marred ‘The Only Lovers Left Alive’. It is exactly what Paterson needs when he’s at his lowest and has to remind himself what he’s all about, and with that in mind it could indeed b e the work of his imagination. 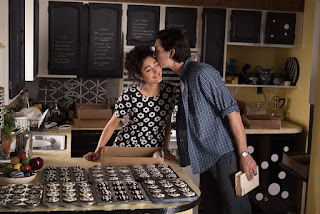 Like ‘Brooklyn’, ‘Paterson’ is about the general decency of people but it’s also about how art colours their lives; like ‘American Honey’, it utilises a loose, baggy style that is ultimately and quietly uplifting. With a welcome lack of cynicism, Jarmusch focuses on an individual’s routine of life to celebrate the quirkiness and natural poeticism that makes the everyday worth living.