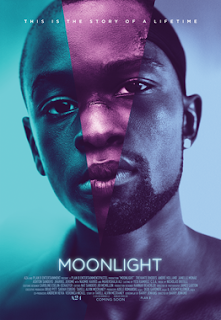 Like ‘Manchester by the Sea’, another film-of-the-moment, here is a further drama whose performances are exceptional across the board. Told in three segments – childhood, youth, adulthood – here is the story of Chiron, a gay black man trying to reconcile those identities over a lifetime in a mostly disapproving environment.

Barry Jenkins’ film starts with Chiron as a child (Alex Hibbert) hiding out from his tormentors and running into a drug-den and Juan (Marshalala Ali), a passing drug dealer who literary tears down a wall to talk to the kid. How’s that for symbolism? The boy turns out to be a cagey, silent kid and already we can see that trusting others is something that he has learnt not to do easily, if at all. But Juan perhaps sees in the kid something that he was, or simply a vessel to place his untapped paternalism in; whatever the motivation, Juan and his girlfriend provide a safe place for Chiron as he tries to negotiate bullies and his unreliable drug-addict mother. The other kids sense a difference in Chiron that he hasn’t quite cottoned to yet and this makes him an easy target. Then we jump to Chiron’s youth (Ashton Sanders) and he’s still fighting the same battles but he’s now torn between keeping silent and speaking up for himself. But by now, he realises that he is targeted because he is seen as gay, which he is. How to stop it all? Then we skip forward to his adulthood (Trevante Rhodes) where he has becomes somewhat of a stereotype: a man dealing drugs. He can bury his sexuality beneath this identity: he has built himself again from the ground up and forsaken his natural sentiment and emotional range. Until the old friend he once had a sexual encounter with gets back in touch. 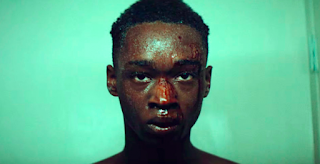 ‘Moonlight’ has attracted praise from all over and allow me to join in. The theme of bildungsroman and the three-act conceit is likely people think of Richard Linklater’s formal daring with ‘Boyhood’ to capture growing up. Of course, ‘Moonlight’ probably triggers all kinds of preconceptions as to what it will be like once you are told the plot, but it’s not quite the gritty drug-addled tragedy you might assume: it’s bright, easy-going and given to occasional flights of lyricism that hint at the influences of Wong Kar Wai and Lynne Ramsey. The three actors playing Chiron move fluidly into one another – all exceptional – and so rounded is his character that revisiting him at different stages of development clearly reveals different angles on his personality; the leap-frogging structure allows a view of how Chiron develops, how his experience informs his decisions and how that affects his development. Certainly, there is a resonant ring of truth to the tale, and in adapting semi-autobiographical Tarell Alvin McCraney’s play ‘In Moonlight Black Boys Look Blue’ Jenkins has said that this tale resounds with his own experience. Indeed, this will resonate with any repressed and bullied individual. 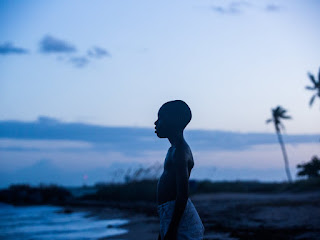 Brett Easton Ellis has taken ‘Moonlight’ to task for dwelling on a “victim narrative”, but that seems very narrow and a sweeping neglect of the nuances the film and acting presents. For example, fully, this is a story of how Chiron decides no longer to be a victim – there is the moment in the school office after being beaten up where he seems to take on board the advice he’s been given that there is a point where a person has to decide what to be. The point seems to be that he is made to feel that, within this culture, there are few identity options deemed open to him. He decides not be a victim but that leads him to an identity where he has to shut down his sexuality and neglect his subtleties. It’s about the tragedy of not feeling you can be who you really are due to what are seen as cultural norms. Indeed, this is spelt out during the remarkable final kitchen conversation between Chiron and Kevin (André Holland).*

The Movie Waffler finds the ending a little too cute and flawed for that, perhaps with the idea that a happy ending is a sign of weakness; but it’s far more ambiguous than that, surely? All we have is the hint that Chiron has been able to express himself truthfully for once with no guarantee that this leads to anything more (indeed, Chiron’s smile may be untypically beatific, but Kevin’s more inscrutable). And, surely, why would you begrudge Chiron a moment of happiness? The film leaves him in a brief state of hard-won contentment but surely it would be a mistake to think this will typify his life from thereon out? Nick James says ‘Moonlight’ is sweepingly romantic, and there is that to it, but since when has a romantic venture for a gay black man had so much crossover appeal? Indeed, it is surely that popular cinema is including so many diverse and minority groups into popular narratives that has contributed to the era’s conservative political backlash. Sheesh, it’s an Oscar winner. Who’d have thunk? It’s one to make the racists and homophobes and right wing to bring on the ‘Hollywood is liberal politically correct gone mad hellspace oh so horrible’ tirades (indeed, Tucker Carson happily obliges). But for those of us that go to film to see reflections and representations, to discover how other people live and survive and therefore learn a little about them and ourselves, this is a treat.

‘Moonlight’ can soak up all the praise its had been given for its performances, steady pace, careful dialogue, segues into the poetic and its use of music are all exemplary (when we finally get to hear the song that reminded Kevin of Chiron, its undisguised romanticism is quite a shock and cuts deeps). It will probably survive the stigma of being an Oscar winner as this will typically bring on a backlash against its popularity, but it’s important (for reasons that Todd Brown discusses) and it is fully worthy. 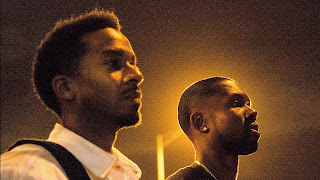 • Brett Easton Ellis also feels that ’12 Years a Slave’ trades in a “victim narrative”, which is surely a woefully miscalculated viewpoint. He seems to be conflating the narratives of “victimhood” and narratives portraying “making victims”: ’12 Years a Slave’ is about the wilful, violent making of victims, not wallowing in victimhood. For perspective, he thinks Tarantino’s ‘Django Unchained’ a superior film. I have enjoyed many of Ellis’ books but I don’t go to him for empathy: indeed, it is telling that the only Ellis novel I have been properly moved by is ‘Lunar Park’, a story whose tragedy rests upon the protagonist’s selfishness and inability to empathise with his child.