'The Prodigy' by Herman Hesse: nature vs eduction 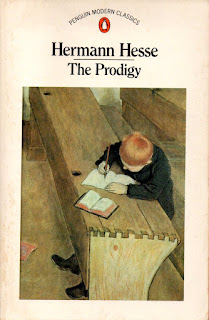 Originally ‘Beneath the Wheel (Unterm Rad), 1906
Peter Owen Publishers translation, ‘The Prodigy’, 1957
Translated from the German by WJ Strachan

Herman Hesse’s bildungsroman 'The Prodigy' - the original title of 'Beneath the Wheel' is more explicitly aggressive -  focuses on Hans Giebenrath, an intelligent and sensitive boy, eager to please and excel from his provincial origins. But having successfully entered a theological school, he finds that its focus on the technical rather than the emotional education of the young drives him to a breakdown. Hans’ ambitions, wants and needs rest between the poles of the natural and educational worlds and the establishment falls far short of meeting these. 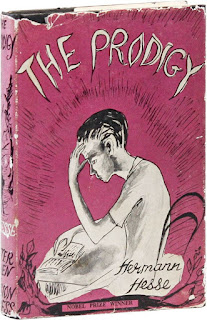 School in ‘The Prodigy’ is a serious business which, if it is not openly abusive, is oppressive and devoid of compassion. There is no satirical take on teachers as in Mark Twain’s ‘The Adventures of Tom Sawyer’ (1876), or elongated sequences where the classroom is a chamber of humiliation and physical punishment as in James Joyce’s ‘A Portrait of the Artist as a Young Man’ or David Storey’s ‘Saville’ (1976). In Joyce’s ‘Portrait’, the protagonist rejects the source of his torment, namely Catholic education, and, even if he is not happy by the book’s close, he has survived. Storey’s ‘Saville’ also features a prodigy, a son of a miner who, by strength of natural intellect, may ascend from his class origins; yet he is unable to escape the front room of his home and subsequent destructive bitterness sets in. In ‘The Prodigy’, it is not outright cruelty and sadism that defines the boy’s experience but simple indifference to whom Hans may be – an emotional depravation. It is Hans’ inability to truly rebel that is finally his fatal flaw. His friend Heilner personifies all the youthful and successful rebellion and bitterness that Hans cannot achieve and barely acknowledges within himself. Heilner is to some extent Hans’ inverse reflection, a parallel set up upon the first time that they meet. Both boys are strolling alone in the woods and meet at a lake. Both flatly agree upon the beauty of the place: their friendship is sealed. With Heilner as a companion, Hans can gradually fail his school and survive the consequences; but when Heilner is gone, Hans is lost, friendless and at the mercy of lessons and expectations, which leads to a breakdown. Friendship then emerges as a natural element, a counter-active force to the unnatural climate of education. 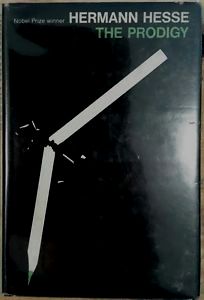 In Twain’s ‘The Adventures of Huckleberry Finn’ (1884), education is – albeit humorously – something to be avoided and the knowledge of the natural world becomes central and superior. Civility is to be satirised. Tom Sawyer may not be able to reject society absolutely – he always needs an audience to play to – but Huck can manage alone just fine. He is smart, cunning and eloquent in an effortlessly self-educated sense, and these qualities make him a survivor. He can take or leave culture. And not for Hans the precocious insubordination of the boys of Kipling’s ‘Stalky and Co.’ (1899), or Compton’s ‘Just William’ who quite happily pal up to upset establishment. It is not learning in itself that pressurises Hans – indeed, he has a voracious appetite for it – but rather the demands and concepts that culture has of education as an institution. There are a number of passages in which Hesse lays out this institution for indoctrination and compliance: 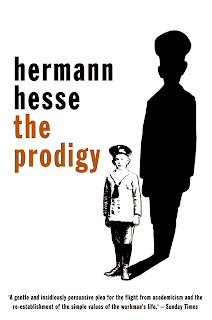 There was something wild, untamed, uncultured in him that must first be broken, a dangerous flame that must be extinguished and stamped out.

...it is the school’s job to break in the natural man, subdue and greatly reduce him; in accordance with the principles sanctioned by authority is its task to make him a useful member of the community and awake in him those qualities, the complete development of which is brought to a triumphant conclusion by the well-calculated discipline of the barrack square.
[Penguin edition 1973, pg. 43]

It is not blatant brutality or unkindness that breaks Hans but rather that the education is at the expense of humanity, ignoring his sensitivity for his propensity for learning: school as a passive-aggressive tool for dehumanisation.
*** 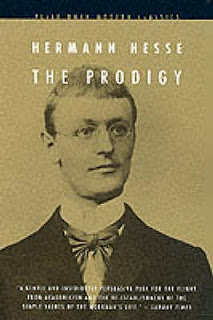 In 'The Prodigy', there is a moment when the order of narrative seems shuffled: the book begins with a brief account of Joseph Giebenrath’s life and then his son Hans’ candidacy for the ‘Lendexamen’; it is only late in the book [chapter five] that Hans’ earlier childhood pre-candidacy is detailed. Having “failed” at school, Hans returns home and visits the Falken where a host of memories come back to him as a prodigy. It has not always been local priests and teachers that have educated Hans. There is his brief but densely sketched friendship with a sickly orphan Hermann Rechtenheil [pg. 114] who taught Hans how to fish, to “study the weather” and a whole litany of practical and observational tricks. Even in this Hans has been an excellent pupil for his friend, but Rechtenheil dies quickly and leaves way for the subsequent influences of Heilner’s friendship. He too disappears and Hans’ need for a stronger, educating friend leaves him vulnerable and lost. But in Rechtenheil, Hans’ need for being taught and for the natural world had once been perfectly embodied. This sequence in which Hans’ early life is conveyed comes latterly in order to show that which he had forgotten and has lost in his quest to become a great student.

Hesse endows Hans’ world with lengthily and beautiful passages on rivers and woods and nature, almost as eloquent and poetic as those of Laurie Lee in ‘Cider With Rosie’ (1959) (“almost” because ‘Rosie’ is pretty much peerless). Fishing is tied to Hans’ bond with nature and with giving him the respite and autonomy he desires as much as academic skill. When Herman is attracted to a girl, the imagery is of animals and (with the cart) the threat of civilisation and technology: 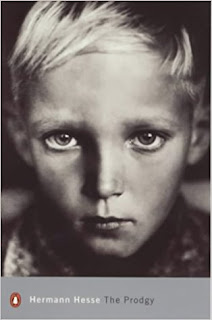 … this one was so lively and talkative and so indifferent to his presence and awkwardness that he drew in his horns helplessly and, slightly offended, withdrew into himself like a snail brushed by a cartwheel.
[pg. 123]

It’s a lovely passage evoking the shyness and inelegance of first crushes and feelings of perplexing attraction. A similar mixture of the natural world and feeling runs through his desire, expressed by the imagery of breezes, of gardens, of clutching fences and stopping halfway across bridges listening to rushing waters. [chapter six] This isn’t quite innuendo, but the symbolism is clear. It’s overwhelming to Hans, being the susceptible soul that he is. 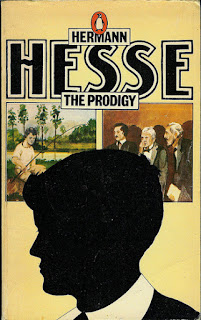 After a night of revelry that puts his observations and extroversion to the test, Hans is found drowned: but was this an accident or was it suicide? The ending argues that if we do not balance nature with nurture then disillusionment, alienation and self-destruction is, perhaps, the tragic end for sensitive souls who cannot cope. How we failed them. Or certainly this is how sensitive souls like to tell their narratives. This is a typical outcome for fictions based on outsiders of some form victimised by society (early texts exploring female roles who always seem driven to death, for example) and here it blends tragedy, suffering and a kind of wistfulness. If perhaps this sides too much with victimhood, Hesse nevertheless presents a fine tirade against education as a tool of indoctrination, and as such as antithetical to individualism and the natural self. 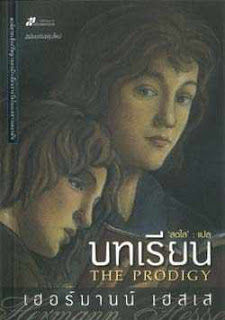