I’ve never been to the FrightFest Halloween all-dayer before and I wondered to myself why-ever not? Of course, being a FrightFest veteran and in the age of binge-watching, an all-dayer isn’t much so much of a challenge. The weather stayed fine and Leicester Square itself is all closed up whilst they construct the Christmas fair, but that didn’t put off the street performers.

• Ian Ratnay (FrightFest organiser) told us that actually the Empire Leicester Square had forgotten to book the superscreen for the event earlier that week.
• Issa López – the delightful director if ‘Tigers are not Afraid’ was there to help with introductions - sat in front of me and I could see her nodding vigorously when Julia Ducournau’s ‘Raw’ was mentioned onstage as part of the recent golden of horror.
• Craig Conway’s young son was there and in the Q&A for ‘Mara’ asked “Why do you always make my dad kill himself?”
• There was a robot in the foyer. 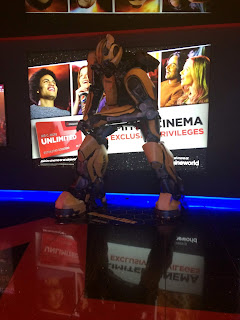 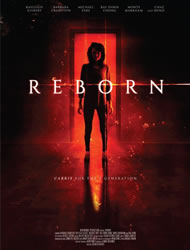 I don’t think I can do better than the FrightFest synopsis: “A stillborn baby girl is abducted by a deranged morgue attendant and brought back to life by electro-kinetic power. On her sixteenth birthday, traumatized Tess escapes captivity and sets out to find her birth mother leaving a trail of horrifying violent destruction and chilling chaos behind her.” Well, first electro-kinetic power brings back the stillborn baby and then she’s abducted, but who’s quibbling? Despite the warmth and appeal of Barbara Crampton and Michael Paré – she’s the mother who hasn’t recovered from the stillbirth while he’s the detective that seems to be sent to every odd murder that’s going, but smart enough to work out what’s going on seemingly with a Google search – this is standard fare with negligible dialogue, chills and acting. Refer to Richards’ ‘Summer Scars’ instead.

A short film about a troubled teen joining an estranged uncle – the always charismatic Paul Kaye - for work experience on a road crew only to find that this is cover for battling portal monsters. This is a prime example of how to deliver enough characterisation and ideas in the short format so that you can easily see it leading to a bigger project. An highly agreeable horror short. 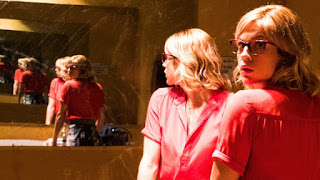 A group of friends discover a portal to other dimensions in their basement and use its temporal shifts to gain the edge in their respective careers. With ‘The Similars’ Ezban showed that he was fascinated with and quite a dab hand at alternative realities, although this was written by Scott Blaszak. This starts with the premise that when faced with a time-bending advantage, a group of average friends will only use it for self-service. And there’s always one that will cause trouble and ruin it all. When the rules are established, it isn’t hard to see where it will go, but there are enough twists and turns to always keep it lively. Thoroughly enjoyable if undemanding, sci-fi concept drama. 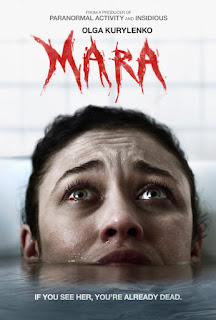 Criminal psychologist Kate (Olga Kurylenko), investigating a seemingly cut-and-dried case of a woman murdering her husband, doesn’t quite believe it and becomes convinced it’s all to do with the sleep demon called Mara. Then follows a series of frights with an obvious Asian horror influence, but earlier on many of these scares are edited so quickly or darkly lit that there’s a blare of music and you might be wondering what you’re meant to be jumping at. It’s all centred around sleep paralysis, but the truly terrifying nature of that condition isn’t really captured by this formulaic horror: all it does here is evoke a captive audience without any other insights or true inventiveness.

Craig Conway injects life into proceedings, being an actor who can play frightening hardmen whilst projecting their insecurity, fear and lost decency: it’s easy to image he’s stumbled in from a more genuinely pained horror. Kate seems to solve things by defying orders, going where she shouldn’t and generally carrying on in tired film-trope maverick style, suffering many warnings from the disapproving and gruff Detective (Lance E Nichols); luckily she doesn’t seem to have a caseload to distract her.

By the time Mara appears in full, she’s memorable enough but nothing new to lift this from the routine.

Three people on a supply-run in a zombie apocalypse find themselves trapped in a car surrounded by the undead and with no keys. It’s the kind of drama that plays out all the time in a post-‘Walking Dead’ world but doesn’t really amount to much more than an aside that’s too long. 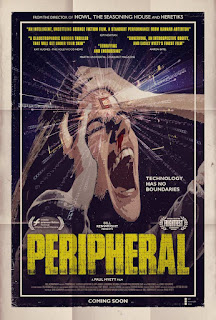 Bobbi Johnson (Hannah Alterton) is the author of a zeitgeist-defining novel sitting down to write a second, but she has writer’s block. The passive-aggressive publisher strongarms her into using a super-PC to write, but as the deadline looms, things become more unreal.

Bobbi is constantly set at snark and pissed off, so she quickly establishes herself as mostly one-note and irritating, although as things plunge into oddness more Alterton is able to show more range. Yet we never get a sense of what makes Bobbie tick, not really; we never leave the flat so who knows where she gets her inspiration? We don’t truly know what this book is, or what the first novel was. Not matter what else happens in the film, perhaps what is most fantastical is that her writing has caused defiant riots:* so the reality starts from the unlikely. She is stalked by an unstable fan that delivers self-harm videos through the letterbox – in Haneke ‘Caché’ style, by VHS. Which doesn’t really make sense, although it feeds into the fetishising old technology and forms. For example, Bobbi’s a fangirl of the classics because it seems those were pure where nothing else matches. She is harassed by the unfeeling publisher whose artificial nature is symbolised by her plastic surgery. Subtle it isn’t, but it does have a few decent gags: one of the best jokes is that the futuristic writing programme changes the gender of her protagonist from “she” to “he” without Bobbbi’s consent.

It’s like a lower-key version of Aronovsky’s ‘mother!’ with its wide brush-marks of symbolism and claustrophobia, but not quite so successful in detail (an audience member in the Q&A asked what the meaning of the blackening of her fingers meant, perhaps not quite aware of its association with ink stains (I guess), which sits awkwardly with the neon high-tech keyboard imagery). This is a world where your favourite famous author pays a housecall (“Gilmore Trent!!”, Bobbie greets). But it's a piece that oddly looks back, thinking the past is the era of authenticity.

It’s critical of the industry and technology killing creativity but all it leaves us with is a typewriter and Bobbi’s history as an ex-squatter junkie as badges of authenticity (the fucked up are always more authentic). And what will she do with a typed manuscript? Does she intend to let it go unread, wallowing in the poetic tragedy of its unacknowledgement? But if she is going to publish, she is going to have to engage with the industry and/or technology eventually, with editors if not editing software. I mean, this absurd technology doesn’t actually stop her from writing something good, it seems. The film is dismissive of the huge unwieldly software without quite addressing the advantages of technology: more artists than ever are creating, present and out there with apps that help and with many self-publishing platforms (like Lulu for writing and SoundCloud for music, for example). More bedroom artists are being seen and heard than ever. (I prefer to be more positive than to gripe.)

But I liked it the more gonzo it went, following its polemic into the ridiculous. Peter Taylor’s cinematography and Peter Hyett successfully keep Bobbie’s flat colourful and interesting and it never falls into the dourness that would make this claustrophobic. But ultimately I couldn’t shake the feeling that it’s moaning in its bubble without fully addressing the full range of possibilities. In this way, it comes across like one of those unfulfilled unsigned artist rants on social media against the system that often lapses into ALL CAPS.

• * This reminds me of Ian McEwan’s ‘Saturday’ where a recital of a poem stops a home invasion, which made me laugh out loud. 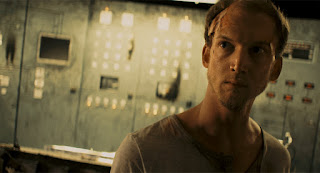 Here is one of those films where it is advisable to go in knowing nothing. I’ll just say this was the best film of the day and you should forsake this review now and try for yourself.

The first half is a slow build-up detailing hapless Alex (Christoffer Nordenrot) and his fraught homelife when growing up with a volatile and damaged father. His only reprieve is in his crush on Anna (Lisa Henni). There is the measured pace and slightly dreamy visuals to make this seem like a typical bildungsroman. Alex grows up into a pretty unlikeable and damaged guy himself and then, halfway through, it reveals itself as a disaster film where Sweden faces a mostly abstract attack. Indeed, if you are luckily enough not to know how things will be, when cars start crashing and piling up on the bridge, the gradual feeling of Holy shit! rewards all the patience of the sombre build-up. Of course, any trailer is going to give something away with the one I saw tried to be as coy as possible, but I also saw a poster that had “Disaster movie!” broadcast as loudly as possible; so this is another case where I am so glad I saw this at FrightFest when I had no idea what was coming so that I could experience the reveals and gradual realisation along with the characters. If you are primed to expect a disaster movie, the effect is likely to wondering when things are going to get going. Let’s just say there nothing earlier on to hint there will be exploding helicopters, or that the chainsaw gift will come into play later. If it all ties up a little to neatly on the sentimental side, there’s enough Swedish dourness and surprising action to make this a full course of entertainment. 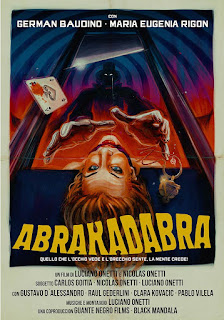 There’s a trend of 80s homages now (and as tiresome as this has become, there are many good evocations), but the Onetti brothers instead make a film that harks back to and feels like the second tier gialli of the 70s. The blaring colours and grainy edge, the continuous recourse to eye close-ups, a slightly choral and funky score, the detached dubbing always seemingly heard a yard in front of what’s seen: it’s all here. It’s a commendable mock-up and looks like the real thing. It’s the wackily rendered tale of a magician seemingly stalked by a murderer and a man that always smokes. Notably much of the twist plays out around the end credits. It’s bizarre and colourful enough to always be intriguing but never quite transcends its pastiche.

And so in retrospect:
• If I seem to be harsher of ‘Peripheral’ than others, that’s because there’s more there to argue with.
• It’s true that I felt much else was standard and noted the lazy writer’s technique of good people trespassing where they shouldn’t and stealing and breaking-in just to keep the plot points coming.
• I probably enjoyed ‘Abrakadabra’ more upon reflection as an aesthetic piece even if I have little nostalgia for what it pastiches.
• When I realised that ‘The Unthinkable’ was turning into WTF?! much of the second half went on my scenes-and-sequences-of-the year list. When the hairs on the back of my neck slowly started to rise as the pile-up piled on, I put it immediately on that list.