I do wonder why it took me so long to come these all-dayers since I have been attending the August FrightFest weekenders for seen years now. Anyway, this is my second Halloweener. You'd perhaps think there would be more dressing up, but the party atmosphere was all present and correct, even if the wealthy outside in Leicester Square was appalling. 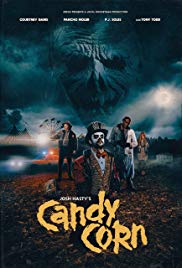 ‘Candy Corn’… sorry: ‘Josh Hasty’s Candy Corn’ (his name is all over the credits) is the kind of feature I always think lurks around the recommendations on Amazon Prime when you select a B-horror. It trades in standard genre tropes – here, it’s supernatural slasher – but has no interest in presenting them in any interesting way. A Halloween prank turns nasty in a travelling carnival and vengeance is unleashed. Everything is drawn out and yet underdeveloped. The stock characters barely leave an impression, but for Pacho Moler (Moler often acting out with his jaw) and Tony Todd; the latter only notable because he’s a genre name, but he doesn’t really get to do anything here except to be grimly disapproving. The social politics of the carnival isn’t investigated at all, although apparently we are meant to intuit something. In the younger cast members, you have Caleb Thomas, who was so winning in ‘Turbo Kid’ and sympathetic in ‘Terror of All Hallows Eve’, so it’s a shame he has such an early boring kill scene: sure, his spine is ripped out but most of it is focused on his face being pressed against a wall. And that’s a main problem: as the kill scenes are these are great shrugs, they don’t redeem the many stretches of filler. Low budget doesn’t mean you should skimp on imaginative execution or at least amusing excess. It’s the kind of film that uses so-mo and lonely piano chords for drama, assuming you are emotionally invested. But that’s quite a nice mask and there is one memorable wide shot of our slasher in a deserted cinema. 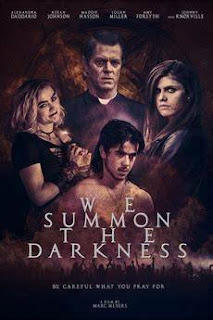 ‘We Summon the Darkness’ (Marc Meyers, 2019) centres on three All-American girls teens with obnoxiousness and privilege all evident. Or rather, they have the “Wild Child” thing down pat except the uncertain newbie who threatens to be a shrinking violet at any moment. They go to a metal gig, apparently looking for pseudo-Satanic hi-jinxs, and meet three rough-and-ready guys and the night seems set. But there are black magic killings going on in the background, and… There’s fun to be had at some messing with gender expectations and some of the twist-and-turns of the plot: it’s generally entertaining overall with a cut-above average dialogue and smart in places, although my pal felt it wasn’t as clever as it thinks it is. Nevertheless, winningly continuing the moderately effective satire and greater gender awareness that I spotted in this FrightFest August Weekend selection. 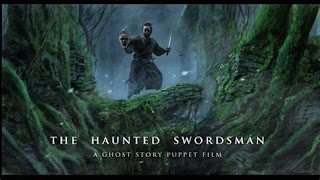 And then we have – animated short, ‘The Haunted Swordsman’ which had stunning puppet design and puppet-action. There’s a story about a samurai seeking a demon-killing weapon, but that’s secondary to the design and execution which is just deliciously hand-made stuff. No matter how dazzling CGI can be, it still doesn’t give the visceral delight of practical effects or something like this where you just know that every set and shot is the result of painstaking hours and work. By Kevin McTurk, whose CV is quite impressive. 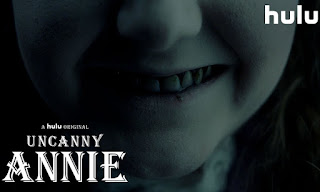 A Hulu Original by Blumhouse – it’s an episode of “Into the Dark” – ‘Uncanny Annie’ is your enjoyable if undemanding horror-‘Jumanji’ scenario (thinking of previous FrightFest screeners ‘Game of Death’ and ‘Beyond the Gates’). Uncanny Annie herself is one of those giggling horror girl spectres that never really does it for me, but the performances and dynamic of the group of young gameplayers that unleash Annie are a cut above. It’s a low budget affair and even though there is nothing original here, it never feels it’s coasting on pace or execution. There’s a decent poltergeist assault, for example. It's probably a more polished 'Goosebumps' episode, but that's okay.

In the Q&A, director Paul Davis spoke of how its multiple Final Girls angle was initially just a ruse for auditions that took hold, and this gives proceedings a little more than usual colour. It also includes a memorable shot of a victim pinned to a door as a dark cloud manifests itself from behind that door. 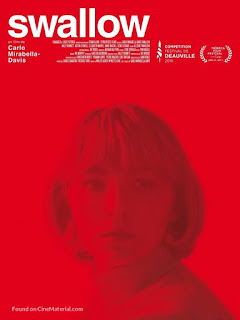 Carlo Mirabella-Davis’ ‘Swallow’ was the stand-out although this fell into the dark psychological drama category. The fact that it wasn’t outright horror was apparently complained about on Twitter which upset Paul McEvoy and sent him on an outburst that FrightFest was also about genre diversity. ‘Swallow’ features a remarkable performance from Hayley Bennet as Hunter – semi-pathetic and vulnerable but never grating – who is finding it a little hard to adjust to her role as a trophy wife. She’s married into money and soon finds she is expected to play a role rather than be an individual. She has her own unresolved issues too and soon all this repression manifests itself in the compulsion to eat odd objects like pin tacks. Engaging with repression, trauma, overcoming victimisation, pressures to conform, the oppression of women, odd compulsive behaviour, even if it wasn’t obvious horror it was certainly dealing with genre themes. Loaded with affecting content that gels in an exceptional kitchen confrontation, the script never quite oversteps into banal melodrama, keeping everything low key, credible, troubling and ultimately cathartic.


And also I was a little star-struck as Matt Johnson, Mr The The himself, was in the audience to watch ‘Swallow’ as the film used the always great ‘This is the Day’. 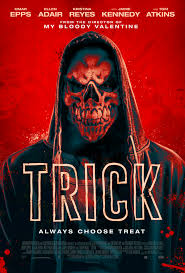 ‘Trick’ starts vividly with a Halloween party massacre before leaping ahead a year for another and for a moment, it looks like it’s going to be a fast and furious and surprising play with slasher and cop drama tropes. “Trick” the slasher seems to be defying death to come back every year to kill. But then lots of stuff keeps happening and it’s quickly evident that this isn’t going to be half as clever as the opening promises, that the quick pace is just a way of piling stuff up without properly pausing to gather interest. It’s all a bit ‘Scream’ without any humour or satire, all a bit overly wrought but all the time losing engagement as we careen to an explanation that doesn’t really make sense. So braindead fun-for-some, then. But Tom Atkins manages to make an impression. 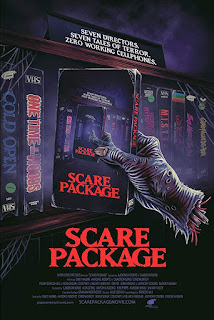 ‘Scare Package’ similarly starts strong: a comedic horror anthology whose first couple of stories are funny and promise lots of laughs, however scruffy, at the genre’s expense. ‘Cold Open’ and ‘One Time in the Woods’ made me laugh a lot. Even the linking story set in a video store is amusing enough. But then, as it goes on, it gets less funny and poignant until a final story that drags on too long and devolves into back-patting cameos. With such a strong opening, it’s a bit of a gear change when things turn more straight for ‘Girls Night Out of the Body’, even though its more vibrant colour-scheme makes it stand out from the other segments; and this means the flow is a little interrupted by time we get to the unkillable killer of ‘The Night He Came Back Again! Part IV: The Final Kill’, even though it’s a decent enough gag. But that’s always going to happen with an anthology. Nevertheless, there’s the sense that it loses its promise along the way. But it’s loyalty to practical effects score major points.The multiple directors each tackle genre tropes making the meta-vibe quite fresh for such a compilation and even if the truly funny drops off early, there are enough self-referential gags to buoy it all up so even where is flounders, it keeps up the goodwill. 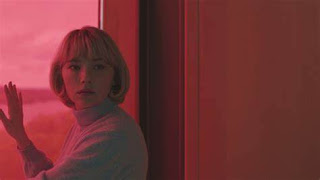 
Best death: setting fire to hair made flammable by a shell of previously-applied hair spray in ‘We Summon the Darkness’.


Most affecting moment: The kitchen confrontation in ‘Swallow’.


Best gag: Couple buying a house “So if we go the library, we won’t find any stories about this place, will we?” ‘Scare Package’.


Nice to see: the dominance and wealth of practical effects


Best “wow” visual: puppets climbing a sheer-drop mountain side in ‘The Haunted Swordsman’.


Surprising highlight: Director Corn Hardy successfully carving a pumpkin in a minute; it then in the corner under the screen, burning away for the rest of the day/night.
Best poster: 'Scare Package'
Posted by Buck Theorem at 11/06/2019