Lifeforce - and my negligible personal experience with it 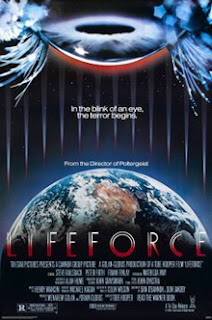 -1- “concerning my negligible personal connection to the film”

Throughout my youth, I lived in a maisonette with my room three storeys up overlooking fields. Across the fields, I had a clear view of the peak of the clocktower of what had been a Masonic Boys’ School but was now “The American University”, and that’s how one night I saw a glimpse of the filming of Tobe Hooper’s ‘Lifeforce’. There’s the scene where the characters helicopter in to a sanatorium grounds in pursuit of the killer alien, and that’s what I saw: the helicopter buzzing around the clocktower one night. In the “making of”, there’s the tale that Hooper was instructing the pilot to go nearer to the clocktower, dangerously, and certainly the proximity of the shot in the film does feel a little too close for comfort. And I am sure I saw some of the lightshow at the end being filmed too.

And over a decade later, I found myself working at that location: it had not been a university for a long time and it was now just a “campus”, hosting summer schools and film crews. Ostensibly I was a general cleaner/custodian (my boss was American) so I was making up rooms for summer schools and picking up after film crews. It wasn’t unusual for me to turn a corner and bump into ‘Eastenders’ (Dot Cotton once joked that I had stolen her make-up), or a kids show being filmed, or to walk out into the quad to see a Bollywood dance routine underway. Before it closed and was turned into luxury apartments, I lived on campus for a few months on the set of ‘Children of Men’, but that’s another story. All to say that the moment in ‘Lifeforce’ where they arrive in the helicopter and you see people wandering along the walkway cloisters in the background, I used to sweep those walkways daily. It was an incredible location and I still have the fondest memories of wandering and working around it.

When the ‘Lifeforce’ characters go to visit the woman in her apartment, that’s what was called The Headmaster’s House, and a Shiek lived there for a time when I first worked there. I walked up those stairs many times. When the character’s go inside the asylum, that mustard colour on the walls is one I knew so well: this was the colour inside every dormitory tower. There was a time when my boss had the chance to repaint, but he forked out extra money for the very same mustard colour to be specially mixed, which we staff could never understand. Anyway, for this alone, ‘Lifeforce’ will always have a particular place in my affection, for tiggering memories of a building that I loved and spent a decade in. 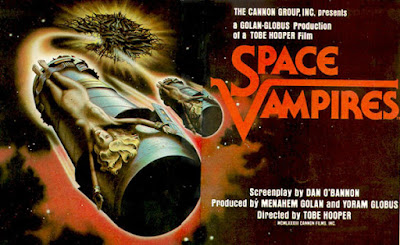 -2- “concerning the film itself”

The last time I saw ‘Lifeforce’ was probably in the Eighties on VHS, so when I saw it again, streamed a couple of years ago, my first thought was that it had never looked so good. And it certainly looks great, the opening space sequence with John Dykstra’s effects being both state-of-the-art glorious and just the right side of old-school cumbersome. And that’s true of the whole film. It captures that feel of enjoyably bad-it’s-good 50s b-movies perfectly without ever quite falling over the edge… well, not if you’re a genre fan, surely. 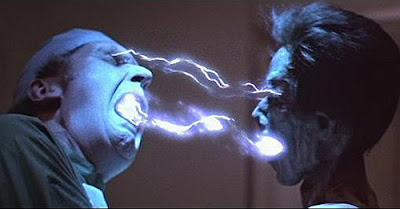 According to the “making of”, the production of ‘Lifeforce’ was quite drug-fuelled and shambolic. An adaptation of Colin Wilson’s book ‘The Space Vampires’ (I mean, with a title like that…) by Dan O’Bannon and Don Jakoby – and with O’Bannon, you know you’re in assured b-movie hands – the plotting is crazed, going from sci-fi to zombie apocalypse and carried along by the threat of a nude woman in the most gleeful pulpy, exploitation manner. It’s a fun merger of sci-fi and gothic tropes. There are several memorable set pieces: the astronaut’s exploration of the spaceship – looking like a birth canal as well as space castle – and the wonderful/hilarious zombie puppets; a zombie dashing itself into dust against the bars of its cell a particular highlight. In this era, this kind of thing rarely got such a big budget. It’s a curio.

It’s a film for the boys. CH Newell says, “At its core, Lifeforce is the dark heart of all humankind’s anxieties about extraterrestrials” and locates the films basis in fears about aliens; but it’s even closer to home, surely, being about man’s fears of womanhood. Women are alien and in control of men’s libido, which men are helpless to, etc. There are a couple of token women at the start, but otherwise it’s mostly Mathilda May with the stunning body walking around in the nude, with other women as mostly interchangeable. There is a moment when a woman needs to be slapped around to reveal her duplicitous nature; and even in a man’s form, she’s treated aggressively into revealing herself. The naked female vampire’s sex drive is linked to death and causes an apocalypse: whole planets can be decimated by her seduction and the giant phallus in orbit. In the end, a bewildered male besotted with her must sacrifice himself heroically to her sexuality. It won’t win anything for any insight or interesting viewpoints on gender. 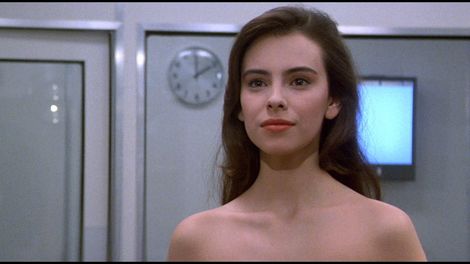 Henry Mancini’s score is turned right up to bombastic, featuring that militaristic undertow that b-movies of yore often had. The acting is properly earnest /wooden with only Steve Railsback overacting (perhaps appropriately) and Peter Firth enjoying playing it as superciliously as he can (“I’m a natural voyeur.”). And you have Railsback shouting at Patrick Stewart, “Listen to me, you bitch!” There’s camp value too.

I will throw ‘Lifeforce’ in with films such as ‘Killer Klowns from Outer Space’ or ‘Shrunken Heads’ or ‘The Monster Club’, or even things like ‘The Man from Planet X’: thoroughly enjoyable cheesy fun that I find myself repeatedly coming back to, although they’re no one’s idea of prime cinema.