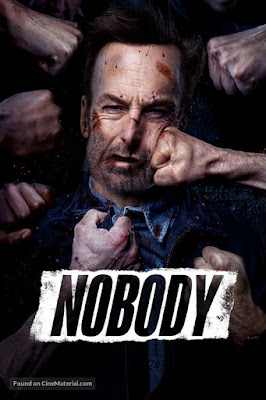 The draw is Bob Odenkirk, because he’s proven himself so great and textured as Saul Goodman in ‘Breaking Bad’ and ‘Better call Saul’. Here, he’s Hutch, a humbled and inured family man when we meet him. You know: emasculated. And then there’s a break-in at his house and, although everyone responds as if he has been cowardly when he doesn’t fight back, we can tell there’s more brimming below. And this leads to a chain events that sees him go on to take down an entire Russian underworld gang. So perhaps I thought it might be more ‘A History of Violence’ than ‘John Wick’, but it’s the latter. Well, ‘Nobody’ is written by ‘Wick’ writer Derek Kolstad, so that makes sense.

It’s another action thriller that plays to the fantasies of potency and kick-ass powers for men that seem to think family life is a prison for their killer skills as Alpha Male. It doesn’t help that Hutch’s family soon become just tokens, their opinions of all this and of their father subsequently barely addressed. His wife is a kind of vapour that hangs around. Odenkirk brings gravitas and amusement, but this isn’t a tale of how an aging complex man with an appallingly violent and psychopathic past is forced to face it as well as bring out latent skills. It’s the tale of how he’s let off the hook - finally! – once he feels underappreciated by normal life. It’s about how decent guys are just pretendin’ and they’ll scorch your earth if you mess with them. Any action wannabe could do this, but the casting of Keanu Reeves and Odenkirk for Olstad’s scripts are agreeably offbeat choices, at least ostensibly. For Alistair Harkness, ‘Nobody’ “gives Odenkirk enough room to slyly acknowledge the regressive nature of this film’s plot while simultaneously embracing the opportunity to have fun going kill-crazy on a bunch of Russian mobsters.”

We know how this works: the audience I was with was laughing as soon as it was known the kitty bracelet was missing and he was out the door like a shot to retrieve it. Laughing at how he just watches from the end of the bus, knowing he’s going to teach the gang a lesson and they just don't know it yet. We know he’s going to kick ass and that’s what we came for. There’s no risk because we know he’s indestructible. 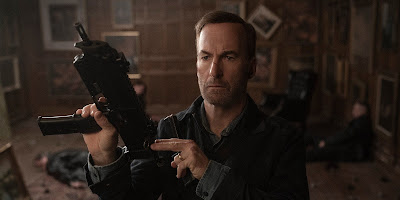 There’s real hurt in the initial fight on the bus, and this is the set-piece that stays in the memory. It takes its time to play out and even has Hutch injured, although that doesn’t linger. Ilya Naishuller directs to emphasis brute force rather than the dance of fighting – but don’t worry: there’s none of the dizzying camerawork of his ‘Hardcore Henry’. It’s always enjoyable and entertaining, even if by the time you get a Russian mobster (Aleksey Serebryakov) crossing the road to his nightclub and not caring about traffic because the world bends to his whim, it’s fully clear the tropes and cliché are going to be the agenda here. There’s also crowd-pleasing cameos from Christopher Lloyd and Michael Ironside, and one of those redundant mid-credit scenes that is all the trend but which I am adverse to in any context other than Marvel films. Mark Kermode says ‘Nobody’ is well-made exploitation trash, and that’s so, and for me it’s the bus fight that stuck in my memory.