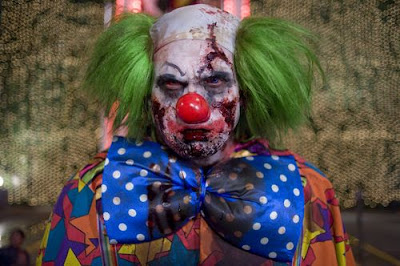 Although it encourages a lot of goodwill - and it generally gets it - "Zombieland" is disappointing in its narrowness. This is obscured by lots of post-modern and would-be zappy humour and effects (which both distinguish and aggravate the opening credits zombie slaughter marathon), a handful of genuine funny moments, a woeful voiceover and Woody Harrelson. In fact, it is Harrelson who saves the show, as does a quite bonkers and good-stupid cameo appearance (which I won’t spoil here, just in case you don’t know).

I dislike gratuitous voiceovers. A lot. Voiceovers, and especially American voiceovers, are ordinarily unnecessary and gratuitous by nature, and "Zombieland" bears a prime example of the annoying, distracting kind; it thinks itself smart and, heh, amusing, but it is really just intrusive and evident. It distracts like a finger being poked in your side every time the film is settling down, going "Eh? Eh?". It does not generate enough genuine wit, gags or interesting spin to feel warranted. Everything would be just as obvious without it.


Where the voiceover is over-written - script by Rhett Reece and Paul Wernick - the core of the zombieland concept is generally undernourished, both in the horror and the romance departments (some ornamental gore alone makes for a weak understanding of horror). It is more zany in its logic than properly grounded. The zombies aren’t really present, only there to give our humorous road-movie adventure gang something to flee from and be to look cool when killing. It is wholly appropriate that the title sounds like an arcade game and ends up in a theme park. "Zombieland" is more a rom-com and odd-couple comedy that has heard horror films are in vogue. Let’s go to the obvious precedent: if there is anything any zombie comedy should learn from "Shaun of the Dead" it is that the real good stuff is in the details. Details like logic and plausibility do not have be relinquished for wackiness. This has more in common with the latter, cartoonish Chucky films ("Bride of Chucky" and "Seed of Chucky") than the black humour of "Dawn of the Dead". In "Zombieland", no one runs out or worries about ammunition; in fact they often use weapons once against a single zombie and then toss that weapon aside. There is no real sense of threat. If our nerd hero (Jesse Eisenberg, who does come across as a cut-price Micheal Sera) is meant to be as cowardly as we're told, then how come we see him from the get-go dealing with zombies so efficiently and dispatching them without any hesitance? Is it that killing zombies must always look cool, regardless of proposed character traits? And, upon consideration, a prank based upon trying to scare a couple of zombie hunters by pretending to be a zombie… seems pretty dumb, actually. Funny, at the time, but it all feels sloppy. Yes yes, it’s a zombie film, and a comedy, but all absurdity still relishes internal logic rather than just flip film mannerisms. We could blame a post-"Reservoir Dogs", post "Friends" post-modern self-reflexism I guess. Hipness over substance.

Zombies are in season now, totally ubiquitous, and so much so that they can even play decoration to a nerd-gets-hot-bad-girl screwball romp. It does not bear the knowing pathos of "Shaun of the Dead" (which, as Mark Kermode has noted, is aging really well), where the zombies represent the total fear of the outside world barely repressed by its awkward but endearing characters. "Zombieland" really has no use for establishing any subtext or for its walking dead, or interest even giving them any essence. They are just there for a few over-the-top gags. It’s an odd-bunch road flick and a milkshake of a romance with some serious gore stirred in just to keep amorous zombie nerds interested. Okay, so let’s say it’s the "Ghostbusters" of zombie flicks, but not half as smart or knowing as it thinks it is.

This, then, is what a zombie film looks like now that zombies have become part of mainstream entertainment. Not that it won’t make you laugh occasionally and won’t try to charm the hell out of you, and as far as diverting, cartoonish amusements go, it’s a fair deal - but it’s a trifle. Not much meat to it after all.
Posted by Buck Theorem at 10/28/2009

Labels: Dawn of the Dead, end of the world, horror, Voiceovers/Narration, zombies

well maybe you are right in some points, but I won't let you tell only bad thing about this movie, this is the best movie about zombies in the last ten years, compares dawn of the dead or land of the dead with this is an insult.

HI, er, Viagra... I really did want to like this film more than I actually did. "Shaun of the Dead" and "Fido" do zombie comedy better.