By day 4, the real world is but a dim memory. At this point in the festival, all I am is a creature that moves from film to film with often very brief sojourns into the sunny centre of London for subsistence. Upon reflection, I am finding “You’re Next” a much better and more playful film; “100 Bloody Acres” and “Cheap Thrills” are my favourites so far with “No One Lives” and the cult episode from “VHS2” close behind for sheer entertainment (actually, I really dig the whole aliens-invade-sleepover “VHS2” episode without necessarily thinking it is especially good). What next?

“Missionary” is a dull and clichéd tale of a fanatic seducing his way into a family with idea of turning it into THE perfect family. The spin on this one is that he is a Mormon, but it’s not a film of any insight with this particular angle. Yes, we all remember “The Stepfather” and this kind of film only goes to show how witty that film was and remains. Some mostly decent performances give way to unintentional humour and underwhelming climax, the kind you know will have the antagonist yelling about family – and so it does. This ends up a bore and not the “Godspoitation” flick the Frightfest programme promises. 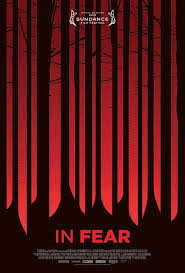 Jeremy Lovering’s “In Fear”, however, really does work up quite an atmosphere of unease, turning Irish country lanes into an inescapable maze of, well, fear. That the film manages to wring every ounce of tension from what is just a couple going round in circles in a car is quite a feat, helped no end by two fine performances by Alice Englert and Iain de Caestecker. For the most part, the whole thing is increasingly unnerving with the slightest of premises, and certainly knowing that Lovering held back the script from the cast during filming so that they did not know what was going to happen gives the enterprise an interesting edge. Eventually, it becomes more a think piece, not just a scare show, and the otherwise underwhelming title does take on a little more resonance, as in what would you do when in fear? Even if it nudges towards the existential, the highly authentic ambience of increasing isolation and terror is likely to remain long after the film is done. 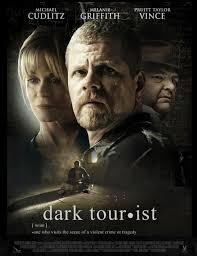 Suri Krishnamma’s “Dark Tourist” is the kind of film that exists in its own little corner, digging deep into places that few horror films go. It may well compete with “Henry: portrait of a serial killer” as the quintessential study of the serial killer phenomenon, exploring both the reality and the mythology surrounding them. Michael Cudlitz gives the performance of Frightfest amongst a pleasingly wealth of good performance appearing at the festival: he is security guard Tim Tahna who likes to spend his holidays visiting places that were important in the lives of serial killers. The film slowly builds up its shocks but it also pushes for genuine insight and perhaps resolves itself as a horrified cry against the horrors and damage we can do to one another. “Dark Tourist” does go to places where most other films couldn’t even imagine and as both social commentary and disturbing character study, it is exceptional. 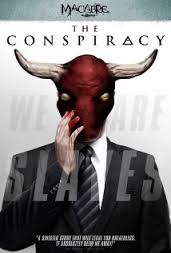 I did have a slightly funny experience with “The Conspiracy” because I misinterpreted something that director Christopher MacBride said when introducing it onstage and thought it was  a genuine documentary about people in the conspiracy theory community. It took me a little while to realise that I was, yes, watching a fiction, although I did feel that something about it was a little off. This is a fake documentary/character-cam horror but the angle at which it enters the genre – paranoia rather than slasher or supernatural, for example – does make it stand out. The conspiracy content is fascinating. Eventually, inevitably, the whole character-cam doesn’t really add up as it ends up being part fake-documentary, half horror vignette. But the sequence where they go undercover does provide a memorable descent into horror much in the manner of a “VHS” short. If it is a film of two halves that never quite gel, “The Conspiracy” at least does try to reach into different areas of horror and doesn’t let the character-cam Isabotage its intent (but yes, it doesn’t quite answer who is editing this? when it comes to the apparent “found footage” segment). A solid and slightly unusual, if flawed, experiment. 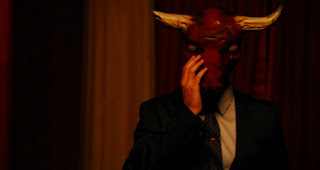 The above image is one of the most memorable I took away from Frightfest - it's gorgeous - and I wouldn't have usually posted it here for fear it might be a spoiler, but as you can see from above, it is being used for film promotion, so... 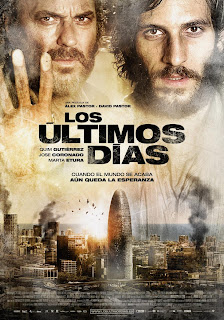 “The Last Days” by Alex and David Pastor is an apocalyptic feature, but not in a “The Dead 2: India” kind of way. The premise is that mankind experiences a sudden fear of going outside, which leaves them cooped up and underground and falling apart. One man decides to find meaning in this deteriorating world by resolving to make it across Barcelona to find his girlfriend. It is true that perhaps on paper this sounds less than thrilling, but it feels to me more akin to those 1970s post-apocalyptic films such as “The Quiet Earth”, “A Boy and his Dog”, “The Omega Man”, etc. and led more by concept than action. It has number of memorable action set-pieces, but it spends as much time on the mundane world of work that the characters come from and the dawning of a new age. The directors did send a message to Frightfest that the ending would totally divide people, but indeed it was one that made a pleasant change from the norm and headed towards something with hope and promise rather than endless horror. 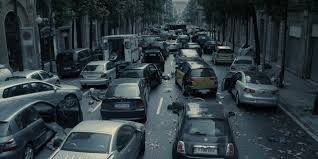 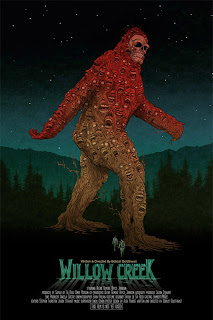 Friends had mentioned that I should see Bobcat Goldthwait’s “Willow Creek” and indeed, even though it was a “found footage” film – which already flagged it as potentially another shaky-cam bore – it was also a Sasquatch film. And that interested me because a simple monster flick seemed like a great idea. Also, Bobcat had opened the festival and was very appealing, I had really liked “The World’s Greatest Dad” and I was most curious. “Willow Creek” was meant to be screened in one of the small theatres in the cinema and they had to shift it to a bigger screen due to popular demand. Well let me state from the start that I loved “Willow Creek”. A genuinely endearing couple travel to the eponymous Bigfoot land, out in the wilds of America, to try and have their Sasquatch moment, filming themselves all the while. And indeed, this film is how to film a found footage premise. It looks filmed in-camera (there are only 60+ cuts) and the sound is all diagetic, so you don’t wonder who has been watching and editing and scoring the footage – or why?! It is half exploration and gentle satire of the tourist culture and business of Bigfoot and contains a long sequence that proved one of my absolute favourite sequences of the festival: a long take that surely outdoes even “The Blair Witch Project” and takes its time to deeply reach into your most primal fears. Indeed, a woman in the audience did scream and I found myself seriously unnerved (it also occurs to me that no one laughed that she screamed because we were all so engrossed ans poked by the moment too). Another audience member was overhead saying that it was “so bad it’s good”, but I thought it had excellent and engaging performances by Alexie Gilmore and Bryce Johnson – I cared! – and ended up being intelligent and probing and genuinely scary. I thought it was great.