We The Animals (book & film) 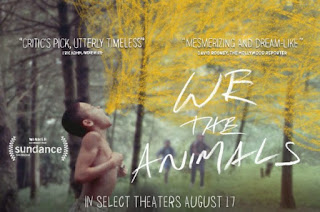 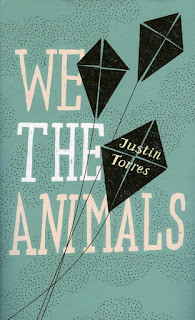 “We wanted more.” begins Justin Torres’ slim novel, a prime candidate for the best-ever three-word summary of childhood. It’s told in fragments, in key memories that make up chapters. Elliptical but fluid, often subtle, vivid and surprising, it’s a quick but immersive coming-of-age read. It’s the tale of three brothers, their macho father and faltering mother; their dysfunctional family, told from the viewpoint of young narrator up to the point where they all drift apart. “We” becomes “I” with the onset of adolescence.

It’s also afflicted with the kind of literary portentousness that overrides a lightness of touch that might have highlighted how humour one of the strongest glues between siblings. Where are the fraternal in-jokes and joshing? The gleeful silliness of kids? Some funnies despite everything would have boosted characterisation and bonded the reader even closer. Rather, we get defining memories, seriously told: growing-up a serious business for this narrator. For example, the scene where the boys cover themselves in food: their mother says it reminds her of when they were born and she asks them to do the same to her. It is, as Patrick Ness says, a moment “Which works thematically, but never for a moment feels like a real thing that could have happened.” Or there’s the symbolism of Papa machismo digging what appears to be a war trench in the yard. Our narrator goes to lay in it.

As an example of how clear prose conveying layers of perspective –conveying that dad resorts to violence, that ma will continue to be defiant, the challenge to machismo, that the kids are watching, that this is a part of their relationships – segues into something that feels more like literary confection by the end of the sentence: 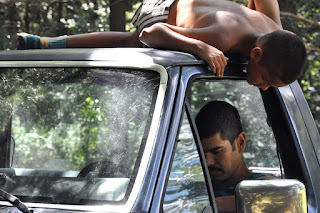 "With that, Paps took a step toward her and slapped her across the side of the head, but she kept screaming right at him, right up in his face, 'Big-dick truck! Big-dick truck!'”* pg. 64

Nevertheless, Torre’s elliptical style is suited to the editing and stream-of-consciousness and the poetic leanings of film. Jeremiah Zagar’s adaptation comes from the same lineage as Terence Malick’s ‘Tree of Life’ but is more akin to Carla Simon’s ‘Summer 1993’ in that it feels tied to a poetic interpretation of reality instead of a wilfully ethereal formlessness. Or even Andrea Arnold’s ‘American Honey’ where every-day colours take on a dreamy luminosity. There’s a voiceover, which usually gets my heckles raised, but here it wisely takes from the source and applies sensibly to provide a thread through all the vignettes (“We wanted more.”).

The representation of gender, as typical in these coming-of-age tales, are of the macho father and vulnerable mother: the former is prone to a temper, though he isn’t mean, and played with injured animal compelling charm by Raúl Castillo; Ma, as always with repressed and frustrated mothers, swings between passive and hysterical, but Sheila Vand manages to step back from overacting. The boys don’t get much to say, but they are a gaggle of unkempt charm. As in the book, they are mostly just a jumble of reactions and postures, soaking it all in. It is only at the end, when divisions and individuality begin, that their conversation strikes as vivid.

Underpinning and defining all this is the near-poverty and desperation of their social status. As Puerto Ricans in rural upstate New York, they are outsiders in this community in this era (1980s?); when they befriend a “white trash” kid, it is perhaps Jonah’s true introduction to others just as disenfranchised as his family. And, of course, there are multiple layers to outsider status – to be an outsider within outsiders – which is where his burgeoning sexuality comes in. The context of class aspiration and pride is articulated wonderfully in the scene where the father gets the family to dance as if they were poor, rich, white, etc.

Zagar and director of photography Zak Mulligan employ a visual mixture of the documentary and the stylised. Mulligan says, 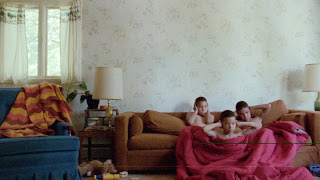 “That particular style, of handheld shooting with wide lenses close to the subject, has really grown on me. That technique is used throughout the film to give the audience a sense of being among the characters, and not just watching them.”**

The camera always feels intimate, however freewheeling it seems. Occasionally, Jonah’s journal and scribblings take flight into animation. All this confidently captures the riveting collage of Torre’s book.

The film expands on the novel’s details, making the narrative more fluid, giving it forward motion instead of staggering through a series of dislocated reflections. For example, the fake phone calls are a repeated game for the boys, as are the visit to the rock-kid’s house; the “body heat” game is a frequent motif.  The journal is introduced from the start where, in the book, its existence is a somewhat abrupt late revelation.  And here, although the film is not particularly less reflective or pensive than the prose, we can see clearly the boys laughing and playing around.

The most notable difference in Zagar’s adaptation is that the film gives our storyteller hope where the novel has him crushed. Perhaps both endings are indicative of their times: we no longer blindly accept tales of unaccepted sexuality being a tragedy, empathising that way; we’ve moved into demands for positivism now. So the poetic and touching earnestness of Torre’s novel becomes a sincere but optimistic interpretation.