Adapted by Kneale from his television serial ‘The Creature’, but something seems to have been lost in translation. Kneale’s ideas about telepathic yetis and species survival should make this more expansive and curious than a standard creature feature, but those points never get the space needed to fully dominate and fascinate. Peter Cushing, in his second role for Hammer, effortlessly shows he can ground any genre absurdities and strides over any silliness and weakness surrounding him. He certainly casts more distinction than Forrest Tucker who barks his way through it all. The former is the clearheaded Englishman with an admirable obsession and purpose; the latter is the mercenary American who will do anything for the money and a name. 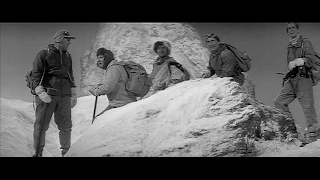 The English are the type that feel they if speak louder and in an aggravated manner, the locals will understand. The natives are babbling and superstitious and are talked about in derogatory ways by the English-speakers; the lhama is the mystic type (played by German actor Arnold Marlé). The Americans are brash and shouty and venal. Misogyny and xenophobia are rife, although the script doesn’t truly follow that: for example, Rollason’s wife Helen (Maureen Connell) cooks dinner for the men, but she’s a professional too in this group and just ignores Friend (Tucker) when he tries to relegate her to a serving girl. 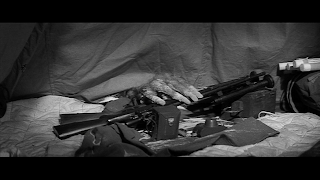 The black-and-white vistas are vast in a way not so typical of Hammer; the studio sets blend agreeably and there’s Cushing. But without Kneale’s ideas pushed to the forefront, you’re left with characters acting stupidly because the story needs them to go out into a lethal blizzard to traipse off alone again. If you’re waiting for the monsters, without the ideas making them truly interesting, they aren’t really seen and disappointing in the glimpse we get. Without the evidence of their features being shown earlier and indicating an intelligent and empathic species as Rollason (Cushing) claims, the final reveal doesn’t quite hit home and comes long after the narrative has lost momentum.


Tom Milne calls this “Hammer’s botch of Nigel Neale’s teleplay.” Anything intelligent is overwhelmed by the stupid behaviour of the characters and there’s not enough fun or monsters elsewhere to overcome weaknesses and datedness. Hammer had Kneale right with ‘The Quatermass Xpermint’ (1955), and the mind-boggling ideas really hold their own for a ‘Quatermass and the Pit’ (1957 - the original series is a personal favourite), but there seems to be a missed opportunity here. 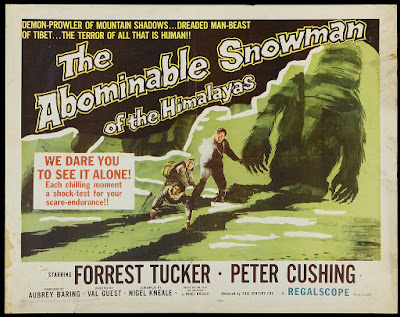