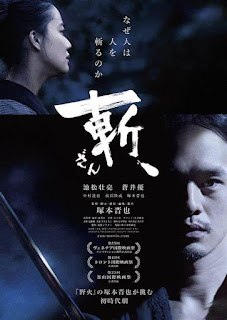 A chambara film set in Mid-Nineteenth century Japan, Edo period: Mokunoshin Tsuzuki (Sōsuke Ikematsu), a ronin, has found work on a farm and diversion parrying with the farmer’s son. Then another samurai appears, Sawamura (Shin’ya Tsukamoto), looking to recruit for an army. Then a group of rough vagabonds also turns up. Tsuzuki is caught between an easier existence, his crush on the farmer’s daughter (Yū Aoi) and living up to his samurai code. 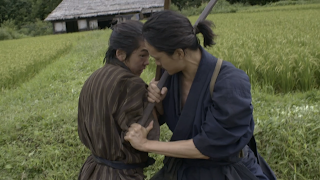 Tsukamoto’s ‘Tetsuo: The Iron Man’ was hysterical in the best way: typical Manga/Anime over-emoting that matched the absurdity and craziness of a man turning into metal machine fighter on screen. The effect was visceral. In ‘Killing’, such a metallic edge is most conveyed by the sound design that pushes accentuated sounds to a harsher, near-discordant tone. This keeps something sharp when the aesthetic is low key and leaning towards the ethereal. And it does start with forging.

The first half of ‘Killing’ sets up the protagonists: this a samurai film concentrating on character rather than action. There’s a melancholia doused in greenery and questioning of the samurai code that’s more derived from Koboyashi than Kurosawa entertainment. Nate Hood summarises: “The result is a decidedly minor key film in [Tsukamoto’s] oeuvre that’s nevertheless equally as nihilistic and nasty as anything he’s ever directed." In Tsokamoto’s other dramas, such as ‘Bullet Ballet’ and ‘A Snake of June’, the hysteria stays in proportion to the melodrama, but there’s something pensive in ‘Killing’ needs an even gentler touch. 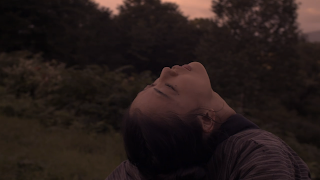 It’s true that when the fight scenes do happen, Tsukamoto’s characteristic frenetic edits make them unintelligible. The sexual assault on the sister is because she gets herself caught – when will women learn to stay back when told? – but it feels like convention for this kind of thing than wholly necessary. But there is an attention to aftermath, to people agonisingly pinned down and sliced up, that gives no illusion that this violence is noble. Samawuro takes time to tell them to reflect on their life as they are slowly dying; it’s not so clear if he is trying to teach them a lesson or just gloating. 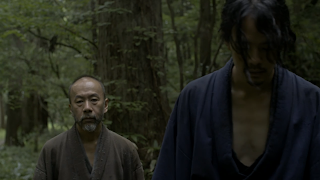 Yet there isn’t quite enough story to stop it being dragged from melodrama into hysteria, muddled motivation, pathetic fallacy, and pretty forest dead-ends. It has a lot of emoting into foliage and ends with a woman wailing into the credits, unaware that it has fallen short of the tragedy it means to convey. The tragedy has been spent with the death of a young farmer who wants to be a samurai and not with the man whose character dilemma is that he can’t kill. Or, indeed, a young woman that loses everything and is only there mostly as a placement mat for male angst. 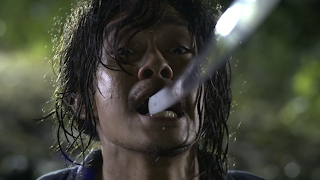 Even so, there is much to admire. Tsukamoto’s wily performance as Samamura. As Yu asks, what is his interest in Tsuzuki? The ambiguity around Tsuzuki: is he a virgin in every sense? Has he ever actually killed? So what I accused of being muddled motivation earlier is also Tsukamoto’s typical ease with leaving things unresolved and unanswered. Like his characters, his films typically exist in a state of unresolved confusions and tensions. Psychological, sexual, physical: the whole gamut. For me, hysteria undermines the achieved subtleties and mysteries, but they are there and nevertheless create a strangely haunting drama. 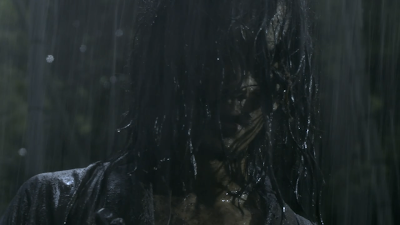