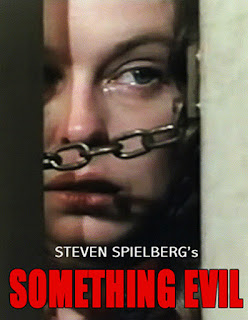 Spielberg’s first movie, made for TV, is an example of how haunted/possessed houses often show preferences where gender is concerned. When they are more concerned with men, the haunting/possession is much to do with homicidal natures; when focused on female protagonists, it bears a preference for madness. That is, the houses tend to become manifestations of the woman’s alienation, repression and psychological anxieties; an expression of their previously internalised instabilities and traumas. Polanski’s ‘Repulsion’, ‘The Haunting’, the endless adaptations of ‘The Turn of the Screw’, and so on. There’s the ambiguity of “Is it all in her mind?” The feminist sympathies of these films have precedents in Henry James’ novel – a seminal text of ambiguity – and Shirley Jackson’s ‘The Haunting of Hill House’ (1959), but also in Charlotte Perkins Gilman’s novella ‘The Yellow Wallpaper’ (1892) and even Emily Brontë’s ‘Wuthering Heights’ (1847) – a house that is, after all, a building haunted by its past and present cruelties. The houses in these films and texts reflect the neuroses of their women with transmogrifying walls and wallpaper, doors bulging with unseen and frightening presences, their rooms threatened by malevolent manifestations, the air disturbed by cries and voices from the past. 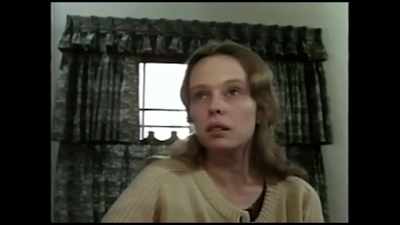 In ‘Something Evil’, the housewife – initially a sunny and fairly confident figure – is troubled at night by the sound of mild weeping from a child. Sandy Dennis exudes a natural eccentricity that lifts the character of Marjorie Worden above stock type, but she’s an artist too and isn’t just there to bake apple pies. Her own children are asleep, and when searching the house (almost caressing the banister as she looks for the moaning), she can find no origin for the plaintive lament. It seems, then to be coming from the barn out back, so there she goes; but there is no one in there and the weeping seems be coming from the stove. No: it’s just a timid shock of a rat this time. But later, it turns out that, in fact, the crying is coming from a jar filled with a red moving substance – a goo, if you will. The abstractness of this is eerie and odd, and therefore a bonus: it is an unusual tool for a devil to use, no? It appears to be calling upon Marjorie’s sanity as much as Sandy Denis’ full array of nervous tics. She gets herself interested in the trimmings of the occult, making trinkets to sell based upon supposedly satanic designs and taking to heart her old neighbour’s tales of having been troubled by devils in his own home.

A picture of a woman troubled by her husband’s constant absences comes into focus: she convinces the family to move to the farm, but she is also gullible and flaky and increasingly neurotic. Her husband is not a bad or negative influence, but he’s in advertising and always away and arguably neglectful in that manner. The children – young Stevie and toddler Laurie - are fairly nondescript stock types, and the neighbours seem friendly and accommodating, with a couple of quirky types thrown in. Well, the nephew seems a little creepy but that’s just a red herring.

What is it Marjorie is troubled about? Well, there is the creeping sense of possession in which she starts acting paranoid and slaps her son around a bit: the disturbance is, typically, prying at her nerves and insecurities as a parent. She’ll lock up the kids and explain to them, through the door, that she no longer trusts herself. But she isn’t playing with axes like Mr Lutz in ‘The Amityville Horror’ or laying it on thick about perfect families like Terry O’Quinn in ‘The Stepfather’. She just gets needier and quietly falls apart. And what is it about that jar that seems to pop up wherever it pleases, crying, to set her off? 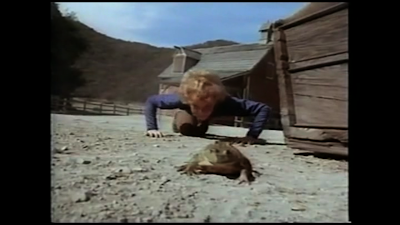 The jar hints at an unaddressed grief and trauma in Marjorie’s life, one that has not been properly addressed either by herself or her husband. If we impose the theory that the jar represents the loss of a child, a miscarriage or an abortion, for example, and the "supernatural" occurrences are more her mind’s expressions of unresolved sorrow and need for attention, then it joins an avenue filled with other haunted houses reflecting female trauma. But there is little backstory to clarify.

Spielberg is, of course, a master director who knows just how to frame and move a camera, even incidentally, to keep things purring and more interesting for this unsurprising supernatural encounter, one that’ll learn those atheists and dabblers. What’s most winning is the obvious affinity he has with naturalism: the bustle and flow of the parties are a highlight, but also the semi-improvisational feel when Marjorie is getting her son Stevie (Johnny Whittaker) to do incantations on the protective hexagram she has painted on the bedroom floor. These are fleeting moments, but they hint at greater things rather than just going through the motions of a tv movie. Of course, next we get ‘Duel’.

The saving grace for ‘Something Evil’ is that it is short, so the fact that it has a paucity of action that leads to very little is quickly glossed over (wait, what about the jar…?). Eventually, it shifts to Marjorie’s concern for her son, which is meant to be a twist but, but like many details has no real substance: how could that secondary character know, since Stevie doesn’t do anything odd or suspicious that we see, only that his mother beats him? Why wouldn’t the devil possess Marjorie as she’s such ripe material? And if it isn’t Marjorie that’s possessed, that surely shines more questions on that beating?

Rather, taking Marjorie as the source of the supernatural, then the act of beating her son filled her with such guilt that she projected her troubled state onto her son so that she could save him and redeem herself. And with that in mind, she’s the cause of the attack on the neighbour just at the moment she calls him. It’s not the whole family hugging in the pentagram, just her and the boy. A tale of a woman having and recovering from a breakdown of sorts, it seems. 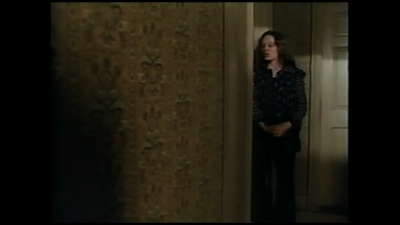 It's very minor and wouldn’t necessarily be of much interest but for it’s director and, as mentioned before, next we get ‘Duel’ and the Spielberg story really starts to take off.