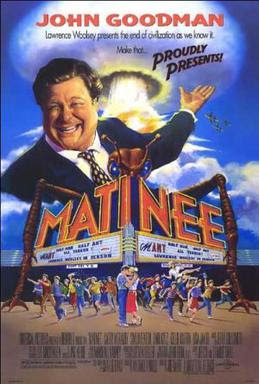 This era of Joe Dante is golden. Its mixture of coming-of-age, easy humour and genre motifs and spoofery hits my sweet spot, achieved in a balance that only Dante was doing. It’s a miracle and a joy that we got that gleeful oddity ‘Eerie, Indiana’, for example.

Ten minutes in to ‘Matinee’ and you could almost miss that it’s stuffed with so much due to its deceptively light and bright manner. It has affectionate and funny homage to Fifties Atomic monster films and huckesterism, and clearly aligns this to a kaleidoscope of fear: real, imagined, personal and political. Right down to a TV prank about female fears (the joke’s on you). This gives way to announcements on the Cuban Missile Crisis – it’s 1962 – and the close-up on the mother’s dread moves to incorporate her eldest son. Gene (a charming Simon Fenton) is an army brat, resigned to a friendliness because of that which surely contributes to his maturity and his closeness to his younger brother (“Yeah: disgusting,” says young Dennis, taking his older brother’s cue). And the opening is rounded off with The Tokens’ ‘The Lion Sleeps Tonight’ on the radio as a storm thunders outside. This whole world is defined by latent, real and projected, natural and manufactured. It’s a personal favourite opening.

It's true that the song use is a little too on-the-nose (The Angels’ ‘My Boyfriend’s Back’ plays briefly with the appearance of Starkweather, just in case you didn’t guess) and John William’s score keeps out must subtlety (I wish The Tokens were allowed to linger longer so the mood of the song really set in; and something akin to Thomas Newman scoring would have been more to my taste). But Dante happily shoves subtext forward. There’s no doubting the themes here, long before Woolsey’s caveman-and-mammoth explanation is animated on a wall. It’s Charles Haas’ script but the tonal balance is distinctively Dante.

There’s a comic book gloss, the kind that sold the USA as the empire of dreams and plenty; the adults maybe a little on the hysterical side, but it’s grounded with the casually warm interplay between the youths. That’s a consistent jibe throughout Dante’s work. This grounding is in details like the jaded indifference of Woolsey’s (John Goodman – Stogie-chomping his way through a William Castle character) actress-partner Ruth (a wonderfully dry Cathy Moriarty) and the barely suppressed worry of Gene’s mother. It’s in Stan’s (the instantaneously likeable Omri Katz, who will always be immortal as ‘Eerie, Indiana’s’ Marshall Teller) male bravado being easily punctured by a far more confident girl, or Gene resigned to loneliness because he’s always moving. It’s heightened reality rather than just movie-reality (for comparison: John Hughes’ youth films don’t have such warmth or realism). It’s a film made on memorable detail: for example, there’s a nice little skit on the UN saying “Hell”, and plenty of mileage out of a former delinquent boyfriend called Starkweather and his hilariously bad poetry (“No skin off my ass-phalt,” has always been a favourite). There’s even a gag-homage to Cronenberg’s ‘The Fly’. 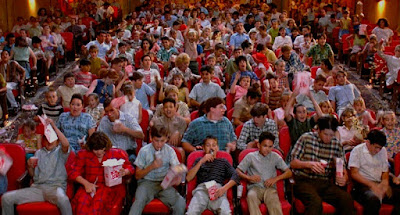 Dante doesn’t really take sides on the matter of real, manufactured or imagined fears, although his nostalgia for this era of cinema-going is palpable. Rather, ‘Matinee’ posits that all forms of fear will thrive and exist in one hotbed of anxiety, in peaks and troughs. There is the moment where Gene’s mother nurtures and tempers her worry and possible pending grief by watching old family films of her husband, and Gene leaves her to this private moment of balming her feelings with film. We could criticise him for not going forward and consoling her, or maybe he just innately understands that uniquely private and emotional relationship between viewer and film. And then later in the film, as the kids are upstairs happily throwing popcorn and taken in by the fireworks accompanying ‘Mant’, the cinema owner is in the bunker in the basement, eating popcorn and watching the news. The medium consoles and it inflames, depended upon your preference. 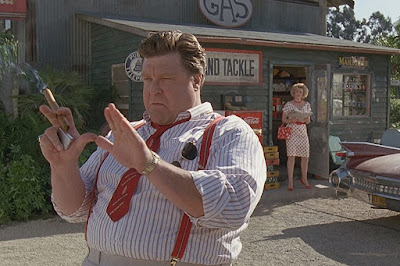 And the movie-within-a-movie, ‘Mant’, is hilarious. These are the patches in the film where satire gives way to gleeful, unapologetic spoof. And it’s always been evident that Dante knows this stuff inside-out: the terrible ‘Mant’ dialogue is belly-laugh funny, it’s so spot-on. Dante’s particularly artistry is in satirising genre while never forfeiting its power. The film ends on hope… the “coming attractions”… but its final image is of war toys in close-up, obscuring the Happy Movie Ending. There’s always grit in the candyfloss with Dante. (And it does short-change The Tokens twice.)

It may have been misunderstood and sunk at the time, but the film has a loyal cult following because ‘Matinee’ is a true Monster Kid happy place. Like Dante’s ‘Explorers’, it leaves me with a goofy-happiness with its Sun-drenched mixture of fear, friendship and film. It’s a hugely entertaining, earnest in its silliness, admirably straightest as a bildungsroman, concluding that, most of all, fear needs an audience. 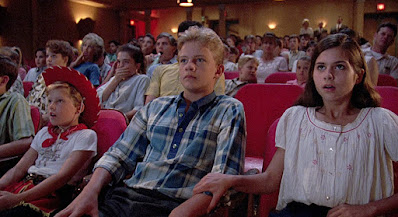