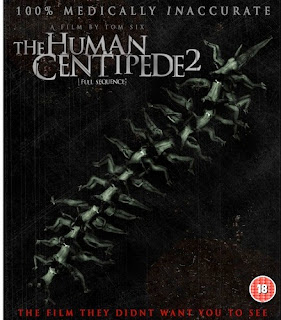 Even friends warned me off this one.

Tom Six’s original ‘The Human Centipede’ possessed an ultimate provocative basis, one that has now become a mainstream meme: even those who haven’t seen the film are likely to know the premise. A line of people stitched together mouth-to-butt. To elaborate: a madman with an accent abducts unfortunate Americans for his plan to make the human centipede of the title, mouth-to-anus, etc. And it’s this horror stunted at the oral and anal stages that Mary Wild* thinks is the true cause for the gag-reflex reactions and criticisms, and there’s a lot to that. A black comedy, a mad scientist romp crossed with torture porn, more akin to, say, ‘Re-Animator’, or ‘The Flesh Eaters’ or some Universal classic (certainly is shares the jet-black blood of the latter). Although it never seemed to be really mentioned, it had an evident tongue-in-cheek twinge that was ignored because people were so busy being disgusted/delighted at the outrageous premise. It was flirting happily with the SO-BAD-IT’S-GOOD pleasures. Certainly, Dieter Laser played it to the campy mad scientist hilt, holding it all together. There was negligible dialogue and characterisation, but there also seemed to be a knowingness that seemed to indicate that this was predominantly intentional. And it had a gloss too. 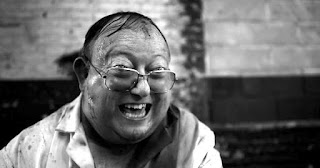 But my curiosity with ‘The Human Centipede 2: Full Sequence’ was that this was Tom Six’s apparent response to genre fans admonishing ‘The Human Centipede’ for not being extreme enough. So, this sequel is surely a jibe at those wanting something more extreme: the central figure is a repulsive, mentally challenged psychopathic fan that lives with his abusive mother, can’t tell reality from fiction and thinks the original is a manual for his sandpaper-assisted masturbatory fantasies. Martin – a gleefully repellent Lawrence R Harvey – works as a security guard, re-watching the original film repeatedly and keeping a scrapbook saying “100% medically accurate”. One of his victims screams, “It’s just a fucking movie!” When Martin entices the original star of ‘The Human Centipede’ to come to London, she witters on about getting parts in a Tarantino movie and surely clearly broadcasts that she is in on the joke. There’s the smidge of industry satire here. But is this film criticising or just GIVING ‘EM WHAT THEY WANT? Maybe it isn’t a jibe at all, but rather meeting the challenge to cross the line of extremity, a laying down of the gauntlet.

From the very start, ‘The Human Centipede 2’ does its successful best not to be liked or in any way appealing. Martin is repulsive, Harvey oozing into the role with goggle-eyed gusto. It’s the kind of role that gets cult kudos, that makes and breaks career opportunities. There is also the side to Martin of a bullied, damaged protagonist punishing those that mistreat him. We know how it’s going to go with the neighbour playing his music too loud: this is not a subtle film. Then there’s the black-and-white, as a means to mitigate the gore, which should add a little class maybe, but also adds to the griminess and mostly makes the rain look black (a wonderfully oppressive if not surreal effect). James Edward Barker’s score is a relentless drone, and there’s no reprieve in the sound-design. Then there’s the portrayal of an unappealing Britishness, the kind that runs through B-horrors like ‘K-Shop’ and ‘Mum & Dad’, full of dodgy dialogue and hysterical caricatures. It’s almost like a hybrid of ‘Eraserhead’ and John Waters and ‘Maniac’. Superficially, it’s slicker than those films - for it has decent production values that make the effects a cut above (so to speak) - although those are classics. But those films were more than just exercises in audience punishment.

And then ‘Full Sequence’ gets to the third act, which jettisons the artistic ellipses and is just relentless torture. Martin wields a syringe like a mad doctor and tries to classically conduct his work, like many a psychopath before him, not least of all Hannibal Lector. But ultimately, even he vomits. As a delivery system of shocks, carefully graduated to see exactly how much you the viewer can take, it is a triumph. The ridiculous extremity of the mother murder is that kind designed to elicit the WTF laughter from gorehounds. But by the end, no one is likely to be laughing: it is because the subsequent extremity is increasingly centred in degradation and relentlessness. Like ‘A Serbian Film’, it’s set up as a challenge, an endurance test. Then the comeuppance, a lurch for poetic justice, harks back to that laughing-at-extremity-ridiculousness. 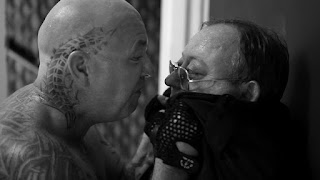 On-set effects supervisor Dan Martin and Lawrence R. Harvey make it explicit that Tom Six’s agenda was to show his detractors how extreme he could be, and certainly the construction of the centipede is gruelling, more like what people expected from the original.* It’s very disarming to hear these creators laugh their way through discussions and interviews about ‘The Human Centipede 2’, to hear Harvey of how he reached the role of Martin as performance art. One can trace back to Grand Guignol: “You came to be shocked, no”? Martin talks of how he gave Six a list of BBFC taboos and Six seemed to be ticking them off like a TO DO list.

But Six and Harvey were also referencing Euro-art films, ‘Salo’ being the obvious touchstone. The thing is that the extremity of ‘Evil Dead’ and ‘Re-Animator’ is for comic effect; serious works like ‘Salo’ and ‘Martyrs’ have political and socio-critical intent, commentating on the very cruelty they are depicting. Waters films have camp goals to challenge conservative norms. I have seen Six’s ‘Full Sequence’ as a gibe at the horror fan that thinks they want MORE, but it doesn’t actually feel condescending, unlike Haneke’s ‘Funny Games’. It doesn’t feel poignant and tragic like ‘Henry: portrait of a serial killer’ or ‘Maniac’, or even ‘Santa Sangre’.  Probably because it doesn’t really end on tragedy. Certainly Martin can be conceived as a tragic character, horribly abused, let down by a care system and articulating that abuse in the most demented way possible, but the film makes sure sympathy is not an option long before the barbed-wire rape (a moment apparently cut from the version I saw). Tragedy is not a lingering aftertaste.

But there is also a reading of it as a criticism of and reaction to the HORROR FILMS MAKE MANIACS arguments that greeted ‘The Human Centipede’: Six was apparently frequently asked if he was concerned about copycats. The sequel asks, “How would that work? See how absurd that is?” Dan Martin speaks of the fact that the 2012 Colorado shooting has a clear link to Nolan's ‘Batman’ movies, but that it hasn’t hurt that franchise at all. Compare with the rabid UK tabloid reaction to ‘Child’s Play 3’ and withdrawal because it was claimed it had been seen by the murderers: the link is far more tenuous. By amping up to ridiculous levels, ‘Full Sequence’ tries to show the accusations against the concept as absurd.

“The film is reprehensible, dismaying, ugly, artless and an affront to any notion, however remote, of human decency.” So says Robert Ebert, which is exactly its come-on for extremity fans. But ‘The Human Centipede 2: Full Sequence’ is perhaps too inside itself and its own genre commentary to illicit the kind of poignancy of the other extreme classics. There is perhaps the sense of a near-miss with Six. As an unforgiving exercise in offensiveness and extremity, as an endurance test, it succeeds and on this it stands. Whether that is enough depends upon your taste. Certainly, I wasn’t inclined to either condemn or commend ‘Full Sequence’. For all its carnival of the gross and grotesque, it ultimately doesn’t have that subtextural sucker-punch of something more, something beyond its in-joke to elevate it. 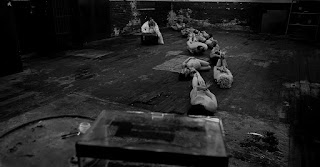 References to Dan Martin and Laurence R Harvey and Mary Wild taken from: Evolution Of Horror pt 27: The Human Centipede 2 -