'Extraction' and "I Came For The Set Piece" 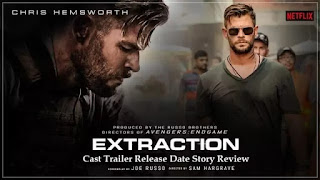 I feel the urge to write about ‘Extraction’ because I did recommend it to a couple of people a while back and feel the need to clarify. I wasn’t recommending the film as a whole, because, as Film Critic Hulk says: “Honestly, so much of it feels right out of the modern generic action movie playbook.” And it is. It’s generic and tends towards the tedious, though professionally executed. The “father figure” stuff is a tokenistic bid for seriousness and texture, but mostly it is “haunted soldier” propaganda. He murderously kicks ass, but feels a bit guilty about it (the kind of apt avatar for those that like movie violence but are a touch aware of the difference to real violence and perhaps feel a bit awkward about that awareness). You know, he has hurt that not even shades can hide. It’s based upon a graphic novel by Ande Parks and Joe and Anthony Russo, illustrated by Fernando León González; but Joe Russo’s screenplay has none the wit and deftness that the Russo brothers brought to Marvel’s ‘Avengers’ films.

Of course, this will be comfort food for certain action fans, delivering righteous violence with moral questions overcome by simplistic emotional and psychological characterisation.* Standard American Action genre. The time spent ‘humanising’ Tyler Rake (heh) feels more a perfunctory obligation than engaging texture. As Film Critic Hulk notes, films like ‘The Raid’ (a favourite) and ‘John Wick’ knows that the action needs only the most functional frame to jettison from. In the former, we know he has a baby at home and we’re good to go; in the latter, it’s his dog.

So, regarding set-pieces: I remember when I went to see ‘The Raid 2’, my friend and I were practically tapping our feet and bursting for the action set piece to come. But this sequel - rightly and smartly - took its time with set up, so that when Iko Uwais was eventually trapped in the toilet cubicle with a Tsunami of bad guys piling in, we practically laughed with glee: Oh! Here it comes! But there was already a wealth of story set up,  and part of the enjoyment of ‘Raid 2’ is that it takes the opposite approach to its predecessor: it dense with narrative, being expansive where the predecessor was stripped to genre essence. We came for the set piece – and were not disappointed – but what we also got was a proper story, the kind familiar from a wealth of sprawling yakuza films. That was all for the good.

But why did I find myself recommending ‘Extraction’? For the one long-take action sequence in the middle.

I didn’t come for the story but was ready to be surprised; but I wasn’t, and my investment in character and story was quickly perfunctory. I mean, Chris Hemsworth radiates likeability, so that helps, but… The only reason I was watching was because I had heard it had a fantastic action long take, which is one of my weaknesses, so I was curious. The rescue generated some interest but something in the nastiness of this first fight-scene didn’t quite sit with me; probably because I am less impressed with gun-action and gun-fetishism than the dance and skill of melee. You see, the bid for seriousness when it was predominantly superficial meant I could not just accept it as “fun” action, so questions of ethics and cultural representation crept in. And director Sam Hargreave is a stuntman so that’s an asset when things start happening.

But then the long-take action sequence started and then I became interested. Drama had been abandoned for dilemma and technical performance and I could enjoy the artistry of execution. 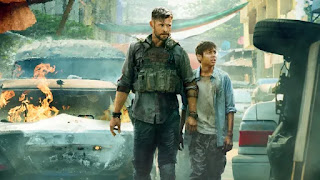 It’s about taking what’s good and having to ignore the weaknesses. The one-take in ‘Extraction’ is apparently a trick, like ‘Birdman’, but nevertheless there was that WTF? element that makes all good action transcendent and fun. It’s why I enjoy the first act of ‘John Wick 3’ so much whilst I can take or leave the rest of it. I Came For The Set-Piece. It was that moment in ‘Extraction’ I was recommending, not story, acting, or other elements, but the technical execution of that one sequence. Because it’s easy to reject an entire film on its general flaws, but for me, that set-piece was still solid, entertaining, fun and free of the generic dramatics around it. My main intention is, after all, to enjoy what I’m watching.

Like I go for ‘Frankenstein’s Army’ for the monsters rather than the camerawork. Like I go to ‘Jurassic Park’ for the T-Rex reveal and kitchen velociraptors. I go for ‘Mr. Vampire’  for the action rather than the humour. I defend ‘I, Daniel Blake’ for its important polemic and humanity over its narrative contrivances. I go to ‘Exists’ for the bigfoot and wish it had more than lukewarm characterisation. I go to ‘1917’ for the continuous-shot gimmick and cinematography, not quite the contrivances of events. I go to ‘The Black Hole’ for the sci-fi visuals and not the weaknesses of drama and cutesy robots. The first ‘Star Wars’ trilogy has so many iconic set pieces and glorious sci-fi pulp visuals and details that I just have to forgive the appalling dialogue. ‘Ad Astra’ scores with me mostly for its moon-buggy pirates and space-monkey set-pieces. In ‘Barefoot Gen’, the gruelling bomb afermath sequence is undeniable.  I always liked the dinner table scene in ‘Talladega Nights: the ballad of Ricky Bobby’ more than the rest of the film. I go to Fulci mostly because I’m curious about the set-pieces rather than any coherence. Similarly, I go to giallo for the aesthetic rather than coherence or plotting. I ignore my reservations of Tarantino’s ‘Inglorious Basterds’s descent into comic book wish-fulfilment so I can appreciate the initial excellent set-pieces.

Okay, so I have fallen into listing wider elements that I don’t prefer, but my meaning is that sometimes there is one thing that means you can’t quite dismiss the whole.

If you want depth with your action, go to ‘Sicario’ and have genuine tension and ethics troubled. It does so much of that right that I can even go with that “oh-really?-come-on!” moment in ‘Sicario 2’ (this comes under that thing of crazy shit really happens but if you put it in fiction, you lose to the people who are scoffing).

So ‘Extraction’ has a really good central action sequence. That’s all I’m saying. 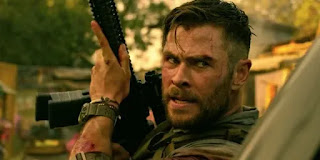