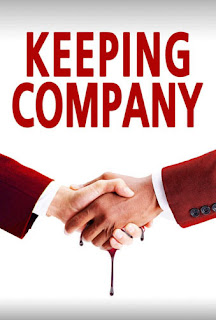 Starting off on the more goofy end of horror, with humour quite broad, but hammering its satire harder and harder until we get bloodstains on white business phones. Trying to have the same bite as, say, ‘I Care a Lot’: it even has that "I'm a shark" bullshit. In this world, parents are monsters, meat is fast food capitalism, life insurance is just a scam, workers become unwitting murderers. It just doesn’t have that virtuoso streak of ‘Society’s finale or a footing in reality that might make the characters more engaging; or the gleeful silliness of ‘TerrorVision’; or, if we’re talking cannibalism and What Lies Behind Suburban Surfaces, the drollness of ‘Parents’. It becomes wearisome, even if it has a good pace. 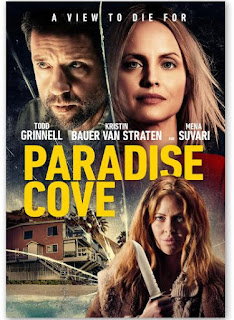 I liked Martin Guigui’s ‘The Unhealer’, but although it starts with a clean and fresh air, ‘Paradise Cove’ just sticks to the clichés until there’s nothing to it. A couple buy a beachfront house to renovate, only to discover there’s a dotty homeless woman under it that just won’t leave. Any hope that it might take a surprising turn from all the other Eighties thrillers that are just like this and keep on coming are quickly disabused as soon as the knife goes in. A pleasing coastal setting make it nice to look at, but that’s no surprise and can’t stop plot holes and the central problem that, if they know she comes and goes and overhears them as she does, why not just leave? They don’t even discuss it. For all its gesturing at social conscience, it just becomes another tale of the privileged finding out that all their prejudices against the homeless aren’t unwarranted.

Michiel Blanchart’s ‘You’re Dead, Hélène’ is tale of being haunted by a dead girlfriend that just won’t quit when you’re trying to move on. It’s funny, but deftly handles shifts in tone to horror and romantic sentiment.

Adam Harvey’s ‘Minimally Invasive’ has that one-location horror scenario that short films do so well. A nervous patient undergoing a routine operation … well, that’s all you probably need to know. The helplessness and squeamishness are all present and correct. It’s blackly comic fun.

And I don’t know what happened because I thought I had bought the whole Grimmfest pass, but I hadn’t and therefore missed what I have seen called the best of the festival ‘Rendez-vous’, as well as ‘Sleepless Beauty’. More than that, I didn’t know that there was also free shorts until midway through the festival and thought I had time to watch… but I misjudged and then they were gone. So I missed a whole chunk. Silly me.