‘Black Test Car’ looks like Sixties New Wave shaded by Film Noir, and it certainly uses this look and urgency to dress up its tale of industrial espionage as a spy thriller. Two companies engage in dirty tricks – blackmail, bribery, bullying, pimping, spying, etc – to beat the other to the punch in developing a sports car. But of course, it’s much deeper than that. The fanatical company loyalty is akin to blind patriotism, and indeed there are CEOs with military backgrounds and the whole rivalry is played out like a warzone where ethics are seen as naïveté. And of course, this is conflated with capitalism. Jonathan Rosenbaum speaks of how Masumura portrayed this as a madness.*

JapanonFilm equates Asahino’s closing moral speechifying as typical of this genre of drama, condemning their tactics as concomitant with gangsterism, but also in a specifically Japanese context.

“But he adds the unexpected twist of comparing the company to the Army and telling his boss he might as well “put on khaki.” Masumura and his screenwriters are not necessarily representative of the society as a whole, but the very idea that the previously god-like Army could now be considered worse than the yakuza in a mainstream entertainment movie indicates just how far a large segment of public opinion has swung by 1960.”

Aside from this insanity of unquestioning devotion, the correlation between sex, work and money is brazen. Masoko (Junko Kano) sensuously kissing a jewelled ring after she’s been pimped out by her boyfriend to obtain industrial secrets is typical. Inevitably, when business is so dominated by men, toxic masculinity is rife; but as Rosenbaum notes, everyone here is villainous. It’s not quite like ‘The Sweet Smell of Success’ where the women are superior, ethically speaking, but ‘Black Test Car’ is even more obvious that the women know that their gender compromises their opportunity and choices. The men have no such mitigating motivation: their company loyalty is corrosive.

It’s not so subtle and doesn’t need to be, with characters often talking in exposition (or at least the subtitles do: “Here is your spying money,” is a highlight). The settings are boardrooms and clubs and bedrooms, but the sequences are often rapid, the pace persistent, the plotting and double-crossing keeps coming, so it’s always compelling. The black-and-white compositions and suits give this an element of surface cool even as the centre gets increasing warped and destructive.

The word “black” became synonymous with corruption in Japanese culture, with Deiei’s Tokyo studio releasing a whole series of films under this rubric. Made during a booming period in Japanese cinema, these films reflect post-war social changes and anxieties about such economic booms – such as the car industry – and wrestled with ethical struggles with new and old systems. Masumura’s follow-up to ‘Black Test Car’ was ‘The Black Report’ (aka. ‘Black statement Book’), a similarly thorough and cynical text on the legal system. 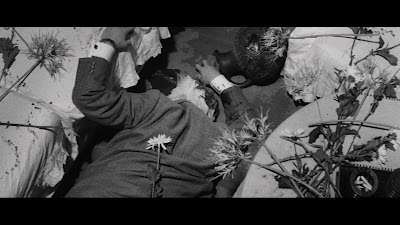 ‘The Black Report’ starts with the beautifully composed aftermath of a murder, the scene decorated with flowers. The mixture of death and decoration is almost giallo-like. Both ‘Test Car’ and ‘Report’ begin with their most striking images – the car covered in a tarpaulin to disguise its design and the murder scene – that imprint themselves in the memory from the outset as the film goes into more offices and meetings to tell its tale. ‘The Black Report’ is less jazzy than its predecessor, but courtroom dramas have a built-in suspense mechanism.

Again, as things unfold, Masumara’s style is rapid with barely a diversion or segue. Just clean cuts, parcels of information developing the narrative with each scene. There’s so many details – this affair, another affair… no… Yes?... that another film might take half hour dispensing where Masumura takes ten minutes. And then, the trial falls apart as the angle of each testimony changes. One side has the ideal of law and the other sees it as sport.

Both these films end with triumph and defeat as equal, as much losing when winning, creating a picture where truth and fairness are impossible within a crowd of personalities and perspectives, weaknesses, plots and corruption. Comeuppance is waved tantalisingly at the audience before the deadline is missed and the idealist becomes the scapegoat.

And yet although fatalism and sleaze caps the narratives, so does acceptance and both films finish with the idealist going on to do presumably future good works, presumably wiser from their experience. Despite the beautiful high contract black-on-white on display, this is definitely a frustrated world of grey. That element of “unfairness” that I always find so memorable in a film does not register here: one of the notable achievements of these films are that they refuse to fall on either side of nihilism or wish-fulfilment. They resound with something far more complex. 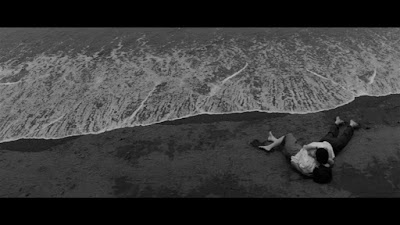 • * ‘Black Test Car’, Arrow release: ‘What Matsumara Does With Our Madness’: John Rosenbaum.